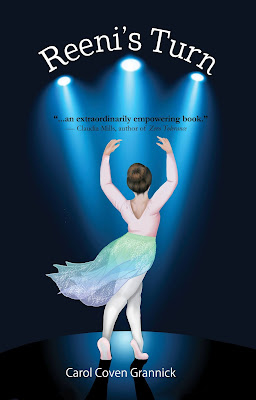 Carol Coven Grannick has been an encouraging, uplifting force for other authors in the Chicago children's writing community, so the publication of her debut novel Reeni's Turn (Fitzroy Books, September 2020) is an exciting moment for cheering on one of our best cheerleaders. Aside from contributing a column for Illinois children's book creators via SCBWI's Prairie Wind, Carol’s poetry and short fiction appear in Cricket, Ladybug, Babybug, Highlights, and Hello, and her poetry and essays for adults appear in a number of venues.
In Reeni's Turn, Carol writes about preteen Reeni and the tumultuous world of middle school, complete with roiling social waters and pernicious body-image issues. Reeni commits to dancing a solo for her retiring ballet teacher, but a lifelong fear of performing holds her back. Peers encourage Reeni to try dieting, but that only leads to disaster. Losing a best friend, as well as her focus on school work and dance, Reeni has to make some big decisions about who she's going to be.
Carol generously took some time to talk about what inspired her middle-grade novel. Enter here for a chance to win a copy of Carol Coven Grannick's Reeni's Turn!
QUESTION: Can you talk about your creative process? Why did you decide to write Reeni's Turn in verse?

CAROL COVEN GRANNICK: My creative process generally involves, initially, dreaming and mulling, none of it deliberate or forced, but rather quite intentional and organic. I may jot down ideas or short poems quickly, but before my first drafts of stories comes this dreamy time. I always think of my print of a painting hanging in Dickens’ office in London called “Dickens’ Dream.”

During that time, whether it’s weeks, months, or in the case of Reeni's Turn, years, I will probably be working on other pieces, as well, whether that’s poetry, an article or blog post, or a different picture book. But the other process continues, as I’m certain it does for many who work in the arts and sciences.
The next stage I can’t seem to change, and I’ve come to pretty much accept it: no matter how much I may wish to plan—even my blog posts—I seem to need to discover what I really want to say in a piece through the writing itself. Only poetry tends to capture a meaning-laden image or thought more immediately.

In terms of Reeni's Turn becoming a verse novel, I’ll try to condense the many turns in the journey. I began my career as a children’s writer in 1999 when I wrote what would become the “seed” story for Reeni's Turn. By the time I wrote a first draft in prose in 2008 I’d written another novel and many picture book manuscripts. But Reeni was always on my mind. It was how Reeni was “always on my mind” that determined its ultimate life as a verse novel. After my then-critique partners read a first draft in prose and encouraged me to continue, the second draft danced around in my brain in free verse. It felt right. It felt like it mirrored the rhythms of music and dance, ballet in particular.

Over the years and many revisions, multiple critiques from colleagues and two professionals, I rewrote it in prose at the request of a first critique with a professional editor, but it was a struggle. I don’t mind “struggle.” But this struggle was my hands trying to write in prose (I did finish a draft) vs. the rhythmic, lyrical language swirling in my brain.

My second professional critique, with another author I respected, got this response first: “Is there a reason you didn’t write this in verse?” So the summary is: at a certain point, learned to trust myself that this needed to be in verse, but also that I needed to make certain the poetry was honest. There are certain sections of dialogue, including Reeni’s “Huge, Loud Voice” that feel more like prose, deliberately calling attention in a different way.

I suppose I also knew on some level that this touchy issue of body image, fat bias, and the diet culture’s negative impact on young children could be well-handled with less narrative, a lyrical touch, and plenty of restful white space—was, in fact, better handled  his way. And while I consider myself a poet first, I wouldn’t automatically write everything in verse unless the story and voice would benefit from that form.
Q: Where did the spark for the character of Reeni come from?

CCG: I trace the true roots of Reeni's Turn to my childhood, when I learned incorrectly that my value seemed to depend on the size and shape of my body. But the seed for Reeni's Turn began with “The Inside Ballerina,” my first children’s story which I mentioned above, published in Cricket in 2001. By that time I had long since found peace and respect for my body and was working to help others find comfort with eating, their bodies, and themselves as a clinical social worker. I felt the issue was (and still is) underrepresented in middle-grade lit, particularly for fourth- and fifth-grade readers. This age group experiences an extremely high incidence of diet experimentation which always causes disordered eating, and plants seeds for possible development of adolescent eating disorders.

Q: You take on big topics like body image and dieting and the signals society sends to children about appearance. How do you want young readers to experience the book and the message?

CCG: I would love readers to be engaged and also comforted by the verse, which offers “snapshots” of Reeni’s journey. And I hope they’ll be thoughtfully provoked by the multiple thematic issues—the reality of what dieting does to body, mind, and spirit; the presence of weight bias in our culture and literature; the value of using or developing “inner” strengths of self-awareness and self-reflection to encourage growth and change—in Reeni's Turn, I celebrate the introverted child’s strengths as a model for all children; and the discovery that we are far better off when we face our obstacles directly and with the courage to tell ourselves the truth about who we are, and who we want to become.

In summary, I’d say there are all kinds of meaningful conversations that Reeni's Turn can begin, from body, to the pull between many sets of emotions (fear and longing, love and loss, confidence and self-loathing, and more), to the feeling of separating a little bit—not too much!—from loving parents and siblings, to the reality that persistence and emotional resilience does not come easily for everyone. The journey to become who we want to be without giving up who we are can be hard!
Thank you so much for this opportunity to share my experience with, and the issues in Reeni's Turn, Kate. I look forward to conversations with readers, their guiding adults, and writers who want to include more body positive, weight neutral issues into their work.
Posted by Kate Hannigan at 7:42 AM No comments: