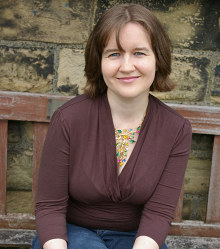 SB: I would absolutely love to go back to Regency England again one day! I adore that period – and ohhhh, did it hurt to say goodbye to Kat and her family. Right now, though, I'm playing with two different projects – one novel set in 1930s America and one novel set in contemporary Wales. Of course, they both feature strong, adventurous girls, and they're both chock-full of magic. We'll just have to see which one strikes publishing gold first! Please wish me luck.
Posted by Kate Hannigan at 5:25 AM 7 comments: