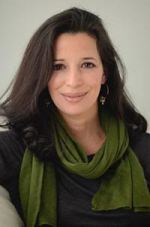 Picking up one of Dana Alison Levy's deftly written middle-grade novels, you know you'll find a satisfying balance of humor and earnest emotions. Author of the irresistible The Misadventures of the Fletcher Family, its sequel The Family Fletcher Takes Rock Island, and the rollicking This Would Make a Good Story Someday (all published by Delacorte Books for Young Readers), Dana is back with It Wasn't Me and what Kirkus Reviews calls (in a STARRED review, no less!) “A timely, introspective whodunit with a lot of heart.”

Jax Fletcher from previous books is among the five suspects of a hate crime perpetrated against a middle-school classmate — photos defaced with gay slurs and threats, another incident in the school’s darkroom. In an ode to the 1985 John Hughes movie The Breakfast Club, the six are rounded up to resolve the crisis, forced together to hash through complex feelings and complicated issues.

Publishing today, It Wasn’t Me has already been named a Junior Library Guild Selection, an Amazon Editor’s Best Book of November, and a Publishers Weekly Best Book of 2018. Dana was kind enough to take the time for a few questions:

Question: With your previous titles, you’ve shown you have a great sense for comedy as well as a talent for exploring relationships. What do you enjoy more — writing the funny stuff or digging into more serious topics? 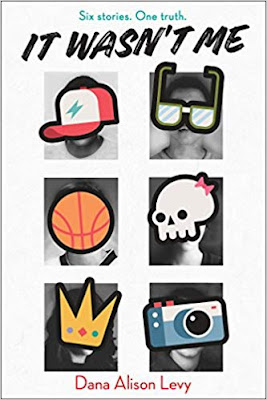 Dana Alison Levy: Writing funny stuff is…well…fun! I really enjoy it and find it comes pretty easily. (Though it is always interesting when editorial notes include things like “What kind of noise would butter make hitting someone’s face?” or “Would she have time to think all of that while falling into the shower stall?”).

All of my books touch on some more serious topics, even while I try to make people laugh, but It Wasn't Me is definitely the most serious. And I found I wanted to dig in, to push my characters a bit more, to make things harder for them, so that they could struggle through and hopefully find a way forward. We are living in challenging times, when a lot of kids feel alone, certain that no one else can understand them. I hoped that by putting Theo and the others through some hard conversations and uncomfortable moments, readers could find their own truths.

Q: This feels like a nod to The Breakfast Club. Where did the inspiration come from for this story? What made you write It Wasn’t Me?

DAL: This was one of those books that sprung fully formed, Athena-out-of-the-head-of-Zeus-style. From the first moment I thought of it, I had the main characters, the story arc, the setting…it really hasn’t changed that much from that first spark. These characters and the premise are definitely based on the iconic Breakfast Club teen hit from the 1980s, but reimagined for middle school. And instead of spending a day in detention, they were spending a week digging into a restorative justice effort. It offered so many possibilities: a discussion of stereotypes, a deep dive into school communities and how they function (or don’t), and a lot of comedy. It was so clear in my mind, actually, that I spent a few days madly Googling middle-grade titles in case anyone had already written it, and I just didn’t know it.

The piece that I really wanted to explore, beyond the characters, was the idea of restorative justice. I am fascinated by this challenging and complex but ultimately really effective way of looking at crime, punishment, justice, and redemption. Restorative justice is used in schools, tribal courts, juvenile centers, and more. The process the students engage with in It Wasn't Me is a version of something far more complicated and sophisticated. But it dovetailed so neatly with my initial question of “Who are these kids, really? And what lies behind the stories they share?”

Q: Why do you write for middle-grade readers? What made you choose this audience?

DAL: I have always thought that books for elementary, middle-school, and high-school readers are some of the best books ever written. From picture books to YA novels, there are true literary gems in all these categories. I thought this as a kid, as a college student and young adult, and as a parent. And I believe it with all my heart as an author. Middle-grade readers (kids roughly ages 8-14) are going through such a challenging and interesting time. The world is opening up in both good and bad ways, and there are so many questions: huge questions about inequality and injustice, more personal questions about bodies and friendships. Books offer a vital way to get some answers. Or at least not to feel so alone.

Q: You’ve been publishing a book a year, give or take. What’s the deal there? Don’t you sleep? Can you talk about your creative process? What does your writing life look like?

DAL: Hah! Well, first of all, it’s more a book SOME years…I didn’t have a 2015 book, and won’t have a 2019 book. So the rhythm is a bit erratic. But the irony is that I write really fast, and I have plenty of ideas, but it still takes a looooooooong time to go from idea to actually writing. I can’t really explain it, often I feel like I’m wasting time, but I’m coming to realize it is part of the process. I liken it to a computer program updating in the background…it’s moving along, slowing everything down, and you can’t see anything happening, but it’s necessary. I think my stories deepen and develop in the back of my brain while I’m doing other things. Usually, once I start writing, it goes pretty quickly. I do typically outline my books, and then follow the outline, writing in a linear way. I am always gobsmacked by writer friends who write the climax, then go back and write some cool scene that takes place early in the book, then write another chapter that just begs to be written…and finally stitch it all together. I pretty much start at the beginning and write straight through to the end.

DAL: I have my first young adult novel coming out in 2020, which I’m really excited about! It’s a contemporary YA called Above All Else, about two teens who have been planning for years to climb Mount Everest the spring of their senior year. But now that they are in Nepal and starting the climb, they have to face the realities of who they are now, what dreams they really carry, and how they feel about each other and the mountain they're climbing. It’s definitely an adventure story and a friendship story and a love story all wrapped up together. I’m also working on a few different middle-grade ideas…some further along than others. The ideas are always the easy part. It’s getting them out of my brain and onto paper that’s the challenge!
Posted by Kate Hannigan at 9:50 AM No comments: