With schools letting out for summer vacation, we're devoting June to great summer reads. And we're putting the focus on graphic novels, simply because nothing gets the wee ones fired up about reading more than a speech bubble. Graphic novels offer adventure, drama, and thrilling storytelling while still feeling recreational. And for kids needing a break from the daily classroom grind, these books are a perfect escape. So please tune in every Monday this month for another installment of AuthorOf's Graphic Novel Summerfest!

Author-illustrator David Petersen has created his own remarkable world with his Mouse Guard series. He's been honored with multiple Eisner Awards, which are considered the Oscars of the comic book industry, for his Mouse Guard: Fall 1152 and Winter 1152 titles (both Archaia, 2009), as well as Mouse Guard: Legends of the Guard (Archaia, 2010). Coming this July, the prequel to his current titles hits shelves: The Black Axe.

In David's beautifully rendered fantasy series, mice struggle for survival amid harsh conditions and dangerous predators. The Mouse Guard heroically battles bad guys, patrols the borders, and helps the residents find routes to safety through treacherous terrain. The mice are swashbuckling characters draped in vivid cloaks and wielding serious swords. And while there is a real Tolkien sensibility, this is a thoroughly 21st-century franchise. The Mouse Guard world is open for easy exploration online, allowing young readers to click on at least 35 characters from the books, five specific groups (like the weaselly Fishers), and a variety of settings and maps. 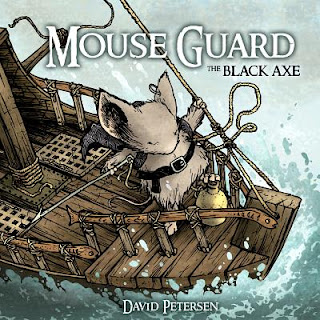 Question: You've created more than just a book series with Mouse Guard, you've built an entire world both on paper and online, including a role playing game. Can you describe the genesis of the story and where the idea originated? Did you envision an empire?

David Petersen: Mouse Guard started as a comic idea I had in high school titled 1149. It was a combination of Disney's Robin Hood and our Dungeons and Dragons adventures. There were no mice at that point; the animals were all human proportioned, but with animal heads, like the Disney film. In college I decided to revisit the idea focusing on making it less of a cartoon-ish idea and more like Aesop's' Fables. In addition to the species being their actual size and keeping their predator/prey relationships, I figured each species could get its own civilization, allowing me some fun world-building.

In planning out how I'd tell a multi-species story did I come to realize the smaller herbivore species would be hard to write in. They were hunted by all, without ever huting any species themselves. And that is how the focus came to be on the mice. After hearing a story of a mouse's plight against the world for survival, why would you ever sympathize with a fox or weasel's story?

I knew I'd set up Mouse Guard to be a place I could world-build if I wanted to, but had no idea how much of it I'd set myself up for. . . and in building that world I set up the 'real empire'. . . it's because of the depth of the world that online character and location guides and role playing games can exist.

Q: The illustrations are incredible, and with the lush drawings of the mouse characters in their colorful capes and weaponry, one can imagine Mouse Guard on the big screen as an animated film. How long do you take to illustrate each story? And what is your process like? How do you develop the storyline and the art?

DP: Thank you. It would be fun to see a Mouse Guard film! I only worry that it would be done correctly, embracing the all-ages feel of Mouse Guard and not ignoring either the old or young audience. . . something few movies achieve these days.

It takes me quite a while to finish a whole book. I'd say about a year and a half per book. We release them as comic book issues first, and I take about three months per issue, but that includes all the writing, layouts, pencils, inks, colors, and lettering. The process starts with an outline that I develop into a script as I start each issue. Then I draw and ink pages and color them digitally as I go. Lettering the pages is the last step, and it allows me a final edit to the text now that I have the final artwork to compare it against.

The storylines develop out of me thinking of the endings to each book. . . not the ending so much as "what is the last page or the last line, or the climax" but the ending as-in where I want the characters to end up emotionally or developmental wise. I also have a goal for the reader for the end of each book: "by the end of this book the reader will know X." Having those goals in mind helps me figure out how to build up to that point. Some of it is decided purely on whim of what it would be fun to draw or write about, but other times it's a more logical approach to what needs to happen for the sake of developing the characters or world. 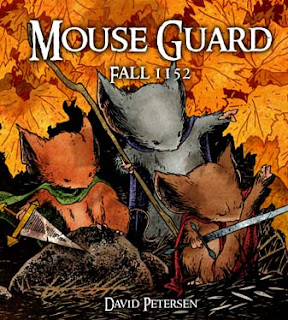 Q: There are elements of Tolkien and other epic tales in these stories. What has influenced you most in your storytelling, both in word and in illustration style?

DP: Thank you again. When I started Mouse Guard, I hadn't fully read any Tolkien, but I had a real sense of what he did with his stories and the world he created. . . and that's certainly something I set out to do with Mouse Guard. Star Wars mythology was a big influence as well, not so much directly as the Star Wars universe, but how George Lucas was playing with the mythic ingredient list Joseph Campbell spells out in Hero With 1,000 Faces. All myth and hero journeys share the same key points and similar paths. My working vocabulary for these was with the classic Star Wars trilogy. I was also influenced by the illustrations of Rick Geary and Tom Porht and the comic pacing of Mike Mignola.

Q: This summer, the prequel The Black Axe will be published. What made you go back in time and lay in the history of the Mouse Guard? And what will you work on next?

DP: In the first book, Fall 1152, I needed to introduce the reader to the world of Mouse Guard, the concept of the Guard itself, the key players, and the historic figure of the Black Axe. The second book was all about world building, deepening character development, and a passing of the torch of who is to wield the Black Axe. I went back in time for the Black Axe prequel to give some weight to the history of the Axe and what it means to wield it. I've hinted at its past in the first two books, but I wasn't ready to show the new axe wielder without giving the reader a more full understanding of the context and history of the role. 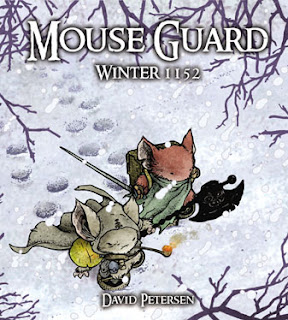 I liked the challenge of working on a prequel story too. There is always a trap in writing past stories since the reader knows ultimately the outcome based on the other books. But I thought I could really add something with this volume, to not show the how or the outcome, but the why. Any part of the story I can add that will help deepen or even change your understanding of the existing volumes I felt was worth telling.

The next major Mouse Guard volume will be a prequel as well. The Weasel War of 1149. It's the war I've mentioned several times and is more of that added history. . . not only with the war, but also with certain characters. For example, it was in that war that Lieam joined the Guard.

Q: I can attest that the Mouse Guard books are among the most popular reads at my children's school library. What kind of reader were you like as a child? And what do you hope young readers take away from your books?

DP: I was not a very active reader as a child. I did okay, I wasn't behind my reading level or anything, but I never found reading enjoyable enough to pursue it beyond classwork. I didn't become a read-for-pleasure guy until I was an adult, and I think it's a shame. I missed out on reading some great books when I was age appropriate for them.

I hope that young readers enjoy my books and that they challenge themselves with more reading and other subjects as well. For me to create my books means doing math, and I have to research science, history, geography  physics, etc. The more well-read I am or willing to become well-read I am, the better I am at making stories and books.

Q: What do you hope to accomplish with the Mouse Guard stories and games?

DP: I really just want to tell good stories that people enjoy. I want to inspire people to enjoy my world so much, they start dreaming up their own to share.