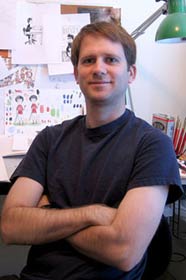 The hugely talented illustrator Matthew Cordell has over 18 books to his name, and more on the way, including tomorrow's release of Gone Fishing (Houghton Mifflin) by Tamera Will Wissinger. And as if that weren't enough to make you green with envy, he is one of the rare birds who can both tell a story as well as draw one, as he has done with Trouble Gum (Feiwel & Friends, 2009) and Another Brother (Feiwel & Friends, 2012). His latest example is Hello! Hello! (Hyperion, 2012), a disarmingly sweet story that just might make you put down your iPad and take notice.

Young Lydia grows frustrated with her digital gadgets, and as the rest of her family keeps tapping away, she follows a leaf out the door and into the wonderful, wide-open world. Her encounters move from a bug to a field of flowers to a menagerie of animals that gets increasingly more ridiculous and exciting. Called back home by her parents, Lydia is able to get them to put their electronica away and share in her adventure. Hello! Hello! received starred reviews from both Kirkus and Publisher's Weekly, which called it "required reading for any kid with a phone." 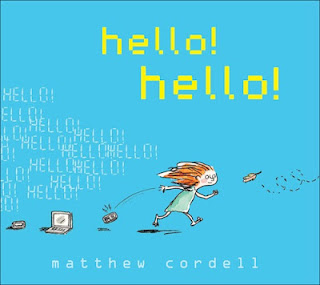 Question: My second-grader has been screen savvy since he could extend his pointy finger. And it has been a constant battle ever since to find the right balance between virtual play and the real-world kind. You are a parent, too. What inspired you to write Hello! Hello!?

Matthew Cordell: I got the idea for this book one day way back when my daughter was 2 years old (she’s 4 now). She and I were playing with some of her toys for a while when I was tempted to go to a nearby laptop to check email or Facebook or whatever. I didn’t think she’d even notice (she was only 2 after all). But she did. She actually said, “Daddy, stop checking email and come play.”

First of all, I didn’t even know she knew the word “email” so that was weird enough, but I was totally busted and felt totally guilty. Later, it occurred to me that this scenario must be playing out with families all the time and everywhere. Once I was made aware of it, I started to look for it, and sure enough I saw plenty of parents and kids in places like parks, restaurants, museums, ball games who were attending to devices as much as, if not more than, each other. I knew a picture book (a book that is enjoyed by both parents and children) would be a perfect place to share this story. Or… stage this intervention, if you will.

Q: A variety of recent picture books have taken a whack at our overly techie age. Hello! Hello! succeeds on its sweetness rather than any heavy-handed message or heaping helping of guilt. Was it hard to rein in your message? Or did you know right away how far you wanted to go with the idea?

MC: I do not consider myself a “finger-pointy” kind of guy. And I hope no one else thinks of me this way. I’d never even considered tackling a book with such a distinct message. But I was sure that this story would resound with others like me, and I really felt compelled to tell it. So it was important for me, from day one, not to hit people over the head with a message. I think it helps that the story is told, mostly, with just one word… “hello.” It helps that that the story is told primarily through its pictures. I think it also helps that we don’t dwell on the negative aspects of the theme. The alienation is at the beginning, and pretty brief. If, in the end, it still feels finger-pointy to some, then that’s unfortunate. But the truth of it is, I’m pointing the finger at myself as well, and that’s how this book came to be.

Q: Picture books generally connect with two audiences – young children and the adults who read to them. Who were you trying to reach with Hello! Hello!?

MC: This is one of the most compelling and most difficult things about making picture books. You must please two completely different audiences. If you lean too far in one direction or the other, you are not doing a good job of it. If one makes a book that is rich in irony or sarcasm, the kids simply will not get it. If one makes a book that is too cutesy-kid-friendly, then the grown-ups are turned off. (Although, maybe the kids are too!) It’s a razor-thin fine line that a picture book maker must walk along. Hello! Hello! is absolutely intended for both adults and children. I think it is a book for children to identify with (of course, the central character is a child) and it is a book that parents can also identify with and, I hope, enjoy reading to and with their children. 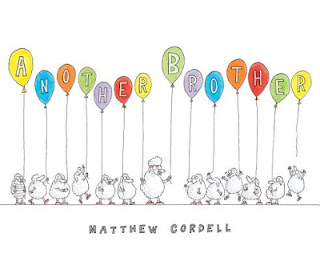 Q: You are also the illustrator of many other books – some you've written yourself, some written by other children's authors. Do you prefer wearing your author hat to wearing your illustrator one, or are they both equally satisfying?

MC: They are both equally satisfying in their own ways, but it is a very special day to me when I can both write and illustrate a book on my own. To have complete ownership over that book is like gluttonous hog heaven. There is a certain and distinct love I have when collaborating with an author, but I have only been blessed a few times to write and illustrate my own books, and I enjoy that so much.

Q: What's next from you? And what do you hope readers take away from the books you write and illustrate? 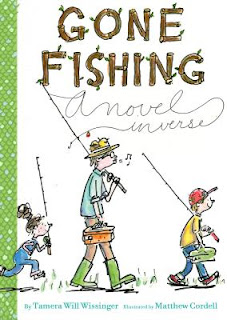 MC: This year, I have four books coming out that I’ve illustrated: Ollie and Claire (Philomel, April 2013) by Tiffany Strelitz Haber; Gone Fishing (Houghton Mifflin, March 2013) by Tamera Will Wissinger; Like Bug Juice on a Burger (Amulet, April 2013) by Julie Sternberg; and What Floats in a Moat? (Simon & Schuster, July 2013) by Lynne Berry. Nothing in 2013 (thus far, at least) that I’ve written, but definitely some stuff in works. Fingers crossed!

I hope readers will get a good sense of family in my books. Joy, angst, love, humor… ups and downs all found and experienced within the family. This feels, I guess, kind of vague, but that is really what picture books and shared reading are about to me. Sharing the intricacies and bliss (and sometimes not bliss!) of our lives together as parent and child.
Posted by Kate Hannigan at 5:25 AM 1 comment: