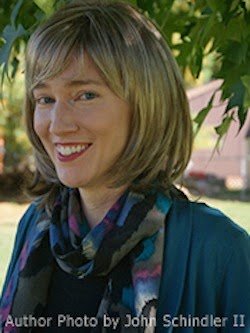 Just in time for Earth Day comes an uplifting middle-grade read from Holly Schindler about the power one person can have in the world. The Junction of Sunshine and Lucky tells the story of fifth-grader Auggie Jones, who lives in a poor section of town with her grandfather, Gus. When a wealthy classmate’s father launches the House Beautification Committee, the homes he's targeting are ones like Auggie’s. But creative Auggie plans to prove that there’s more to her—and to her house—than meets the eye. Making use of old car parts and discarded machinery, Auggie and Gus discover a new artistic talent: turning other people's trash into treasure. Folk art, to be specific, prompting an interesting look at the meaning of art and beauty.

Question: You are the author of two YA books. What made you want to write for a younger audience?

Holly Schindler: I taught piano and guitar lessons while chasing my first book deal. I really just thought the lessons would help me pay my bills. But when I started interacting with the kids, I was absolutely shocked at how similar they all seemed to the kids I’d known when I was in school! They were all so familiar, in fact, that I began to try my hand at writing for the juvenile market. Right at the very start, I tried my hand at both YA and MG—though my first publications were YAs, I’d actually been writing for the younger set all along, too. 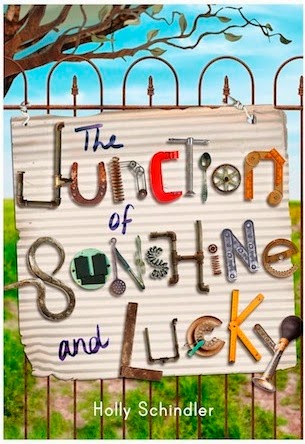 Q: The Junction of Sunshine and Lucky is a fun story that will have young readers grabbing their arts and craft boxes and getting to work. Where did your idea for Auggie and Gus come from? What was the “ah-ha” moment like when you realized you had a story on your hands?

HS: All writers hit “make-or-break” moments, when rejection starts to play with their minds, and they wonder if they should just join the circus. I hit mine about four years into seeking my first pub deal. I pushed through it, obviously. When I got back to work, The Junction of Sunshine and Lucky was the first thing I drafted. Initially, it was a picture book. But the first editors who saw the book said the concept of folk art was too advanced for the picture book readership. So I went about reinventing the 1,000-word picture book as a 45,000-word MG novel. Not an easy task!

But from the very beginning, I saw Gus so clearly—it was as though I was looking through Auggie’s eyes straight at him. And her voice has always been crystal clear. From the first moment I saw Gus and heard Auggie’s voice, I think I knew I had a story. I held onto that all the way through multiple rewrites.

Q: Auggie taps into her inventive, imaginative side in resolving some of the challenges she faces. Does your story have a message for readers about thinking creatively, and reusing and repurposing what we have around us?

HS: I love repurposed items. I always have—even before anyone used the words “repurposed” or “upcycling.” When I was a kid, I went to auctions with my folks—farm auctions were always full of needlework on reused burlap, or stools made out of a Coke crates, or dresses made from feedsacks. My favorite part of Auggie’s story is her poetic eye—she doesn’t see things as they really are, but as they could be (which is why she speaks so heavily in metaphor and simile). Her ability to see things as they could be is a big part of why she becomes an artist, why she can pick up a rusted pipe and see a dancer. I’d like to think that after spending time with Auggie, readers will have acquired a bit of her poetic eye, and begin to see the broken necklace in their jewelry box or the busted remote control car under their bed in a new light.

HS: My next YA, Feral, releases this August.
Posted by Kate Hannigan at 5:30 AM 1 comment: