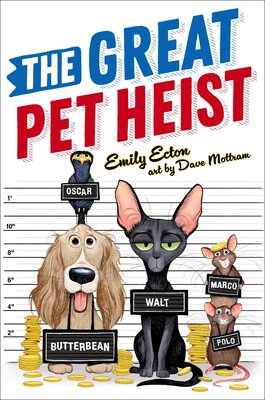 I've long been a fan of the hilarious Emily Ecton, a former Chicagoan and wonderful member of the local children's writing community who now calls Virginia home. Pick up any of her eight middle-grade novels (The Ambrose Deception, Project Jackalope) and you'll see her humor showcased throughout, as well as her sheer sense of fun. Emily's latest, The Great Pet Heist (Atheneum Books for Young Readers, June 2020), had me at hello. From the moment we meet the ragtag collection of animals as well as their perfectly named human, Mrs. Food, we're in for a delightful, utterly engaging ride.

A former producer and writer for NPR's comedy quiz show Wait, Wait . . . Don't Tell Me, Emily clearly understands comedic timing and delivery. And as a devoted dog owner, she gets the nuances of living with pets and the very real possibility (probability?) that they have lives outside of what we see when we're home with them.

In The Great Pet Heist, described as Ocean's Eleven meets The Secret Life of Pets, an apartment dog named Butterbean sees its owner slip and fall, and head off to the hospital. What's ahead, Butterbean asks. Enlisting a few neighboring animals in a scheme to support themselves in case Mrs. Food can't care for them anymore, the clever pets plan a heist.

I laughed from start to finish, and I'm so happy to learn there's a sequel in the works! It's called The Great Ghost Hoax, and in it Butterbean and the others investigate a haunted apartment in their building. It should be out next year. Emily was nice enough to talk about how this book came to be.

Enter here for a chance to win a copy of Emily's "The Great Pet Heist"!

QUESTION: Where did the idea for The Great Pet Heist come from? Was it a fully formed story or did you have just one or two characters in mind? Can you talk about the evolution of the project?

EMILY ECTON: I read a newspaper article about a woman who'd left all of her money to her dog, and I started thinking about what would happen to a pet who thought he'd inherit a fortune and then found out that he wouldn't. What would he do? That's how I came up with the idea for the heist, and then it was just a matter of putting together the heisting team.

Oscar the mynah bird was the first character who I knew would be in the book (since he's the brains behind the operation), and Walt the cat and Butterbean the dog weren't far behind. Before I started writing, I had to figure out how the animals would pull off the heist, which special skills they'd need to make it work, and which pets would make the best team.

Q: Are you a plotter or a pantser? What drives the storytelling for you—working from the character or from the plot?

EE: I'm definitely a plotter! I like to have all of the major details worked out before I start writing—it makes it easier for me to keep track of where I'm going, so I don't have to revise as much afterward. (I don't love revising.)

But I think character and plot are both equally important in developing a story. Even though I have a pretty clear outline when I start, the plot choices have to come from the characters or they won't work. Butterbean wouldn't suddenly start doing research on the computer, for instance, no matter how much I wanted her to. She'd need to be a different dog to make that plot point work.

Q: Mrs. Food, animal quirks, laugh-out-loud hijinks. I found The Great Pet Heist to be hilarious. Do you find humor hard to write? Do you look to other authors or shows for inspiration?

EE: That's great to hear! I have a background writing in comedy, so at this point, I think it's easier for me to write humor than to write more serious stories. I get inspiration more from news stories or random things that I see that spark ideas, but books that have humor in them are some of my favorites—I love authors like Terry Pratchett, Jaclyn Moriarty, and Polly Horvath.