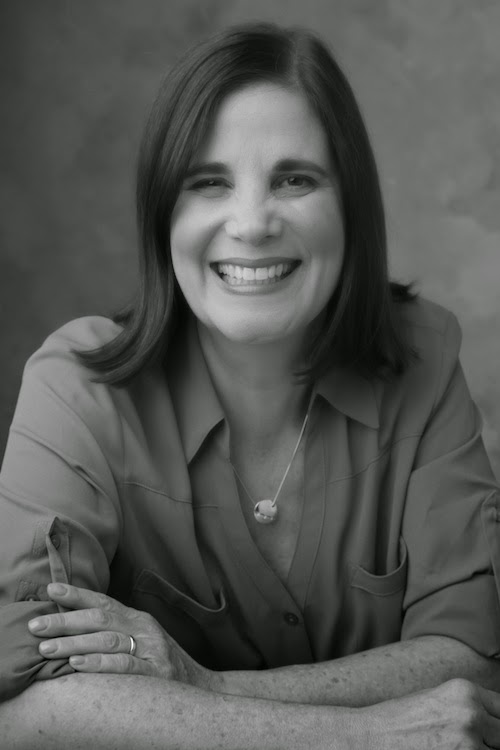 Of course you already know today is National Peanut Butter and Jelly Day! So in celebration, it's only fitting to talk to Janet Nolan about her adorable picture book PB&J Hooray!: Your Sandwich's Amazing Journey from Farm to Table, illustrated by Julia Patton (Albert Whitman & Company, September 2014). Janet has a knack for finding fascinating topics to delve into for young readers. Her Firehouse Light illustrated by Marie Lafrance (Tricycle Press, 2010) tells the story of a lightbulb at a California firehouse that's been burning for 100 years.

Janet was nice enough to talk about writing and researching her books.

Question: You clearly enjoy research in your writing for young readers. What was it like researching the story of peanuts, grapes, and grain for PB&J Hooray? Can you talk about your process? 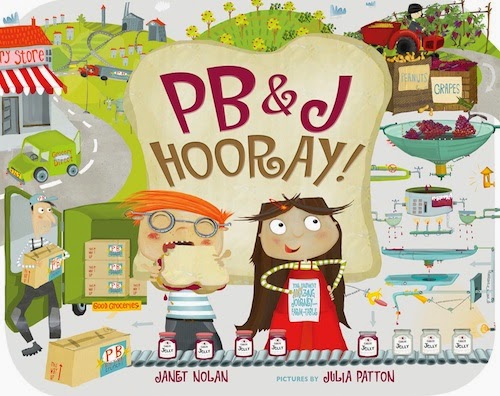 Easy to make,
yummy to eat.
But where does the food come from?
The Grocery Store."

The book ends with the planting of seeds for peanuts, grapes, and wheat. In essence, PB&J Hooray! is the backstory for a peanut butter and jelly sandwich.

Regarding my process, I think I’m drawn to writing non-fiction because I love researching. And when I want to learn something new, I know exactly where to go. I head to the children’s section of my local library. The chairs might be a little small and the tables a tad too short, but while doing the initial research for PB&J Hooray! I was like a kid in a candy store pulling books about farming, manufacturing, and shipping off the shelves.

I love the visual and visceral appeal of children’s books and believe the word usage and imagery is a great starting point for acquiring knowledge. Once I feel I have a handle on a topic, which in this case was how peanuts, grapes, and wheat are grown, I’d moved onto other sources: articles, interviews, non-fiction adult books.

This book was particularly fun to write, because I had such a great time with the language.

"Bread in the bread aisle,
peanut butter stacked on shelves,
jars of jelly lined up in a row.

Put in a shopping cart,
pay on the way out.
Carry into kitchens where sandwiches are made.
PB&J Hooray!"

Q: Is it true your illustrator had never tasted a PB&J sandwich? What sorts of hands-on researching have you had to do (or taste) for your books?

JN: Yes, my amazing illustrator, Julia Patton, who resides in Northumberland, England, had never eaten a peanut butter and jelly sandwich before. She had her first—research for the book—and claims to have like it! Her artwork is amazing; there is so much to see and absorb on each page.

Regarding hands-on research, it depends on the book. For The Firehouse Light, I was blessed by generosity and endless knowledge of the Lightbulb Committee Members: residents of Livermore, California, retired firefighters, local historians, and members of the Livermore Heritage Guild.

As part of my research, I travelled to Shelby, Ohio, where the lightbulb was made. While there, I met with documentarian Chris Leps, who was making a film about the lightbulb. He graciously interviewed me for his film. So, I now get to say I’m in movie: The Century of Light.

I also took a trip to Livermore, California, for the lightbulb’s 110th birthday party. Over 500 people attended, and I can say—with some certainty—singing happy birthday to a lightbulb is an experience I will never forget. 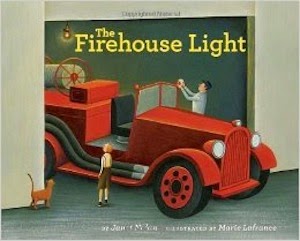 Q: The Firehouse Light, The St. Patrick's Day Shillelagh, where do you get the ideas for your books? How do you know when you’ve hit upon something great?

JN: Ideas are everywhere. Conversations, radio, TV, articles. It’s just a matter of tuning my ears to the interesting channel. I’m always on the lookout for that special idea that sparks my imagination.

Finding interesting topics to write about isn’t difficult. The hard part is determining if the topic will make an interesting book. Facts are great, but what matters is the heart of the story within those facts. If I can’t find that, then I don’t have a story. But when I do, it’s amazing!

Q: Your books are fun, fascinating, and full of information. What do you hope to accomplish with your writing? What do you want kids to take away from your books?

JN: What I hope kids take away from my books is what I felt writing them – that the world is an interesting place. We live in the digital age with an endless amount of information, but that doesn’t always mean the information is connected. Instead of PB&J Hooray!, I could have written three
non-fiction picture books. The first could have been about how grapes are made into jelly. The second book could have been about growing peanuts and making peanut butter. And the third book could have been about how wheat is made into bread. But by connecting the three ingredients, and by describing how food goes from farm to table, I was able to create something bigger than three separate ingredients: a peanut butter and jelly sandwich!