Pat Zietlow Miller, 'Sophie,' and a Squash for All Seasons 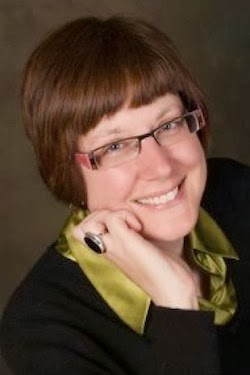 I love vegetables, much to my youngest son's dismay. Love me some spinach, asparagus, all kinds of mushrooms. And especially now in Chicago's deep, dark winter, I really love squash – as a creamy soup, or perhaps baked with a bit of brown sugar. That's why Pat Zietlow Miller's picture book Sophie's Squash (Schwartz & Wade, 2013) caught my eye. It tells the story of a girl who loves squash too. Only instead of letting her parents cook it up in a dish, Sophie makes a best friend of it. Bernice, as the squash is named, tags along with Sophie everywhere she goes. But as the weeks and months pass, Bernice begins looking a bit mushy. What will Sophie do?

Sophie's Squash tells a charming story of friendship, with energetic illustrations by Anne Wilsdorf. It earned starred reviews from journals like Booklist, Kirkus, and Publisher's Weekly, as well as School Library Journal, which wrote in a delightful review, "With lessons on life, love, and vegetable gardening, this tale will be cherished by children, and their parents will be happy to read it to them often."


Question: Picture books cover a wide range of topics, from naptime to pirating the high seas to cows that type. So why a girl and her squash? Who and what were the inspirations for this story? 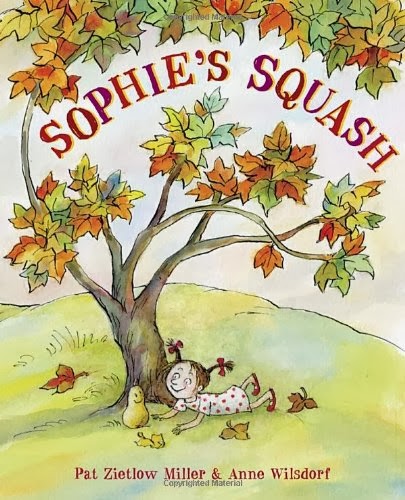 Pat Zietlow Miller: This book was inspired by my daughter, Sonia. She fell in love with a butternut squash when she was 3 or 4, and carried it around like a baby. As a beginning writer, you always hear that you should never base a story on something cute your child did. I generally think that’s a good rule, but it obviously did not apply here.

In my defense, I did add several plot points that did not really happen, so the story truly is fiction. But Sonia, who is 11 now, is very proud to have inspired the story.

Q: It's one thing to have an inspired story, but it's another thing entirely to win over an agent and editor. Was Sophie's Squash a hard sell? What was it like to take the manuscript out into the world?

PZM: It was hard to sell the manuscript – I think for two reasons. First, it was one of my initial manuscripts, and I was still learning a lot as a writer. So the story went through many revisions as I worked with my critique group, studied more and incorporated feedback from editors. Some of the versions I sent out early on just weren’t ready for publication.

Even once the story was more polished, it took a while to find a home. I did not have an agent at the time and was sending the story out through the slush pile. So it often took many months to hear back. And when I did, it was often a form rejection.

But I did get glimmers of hope along the way – a few nice notes written in the margins of a rejection and a few revision requests. Those things kept me going and trying.

I think this story got between 15 and 20 rejections before Anne Schwartz at Schwartz & Wade said “yes.” And I’m so glad that the book ended up with her. She and Lee Wade have loved it and supported it and been extremely encouraging. It was worth the wait.

Q: Sophie's Squash is your first book, and it has earned at least four starred reviews in top journals. That's no small feat! What has the experience been like for you? How long had you been writing for kids before Sophie hit?

PZM: I still can’t believe the starred reviews. I’m thrilled, but I consider myself very fortunate. It certainly was not something I expected. I had been seriously working toward my goal of publishing a picture book for four years before this book sold. I had sold a few stories to Highlights magazine before selling Sophie, but I was very much a newbie.

I did have experience writing, however. I’ve worked as a newspaper reporter, magazine editor and corporate communications employee. And I’ve read picture books all my life, so the rhythm and flow of them was definitely embedded in my head. 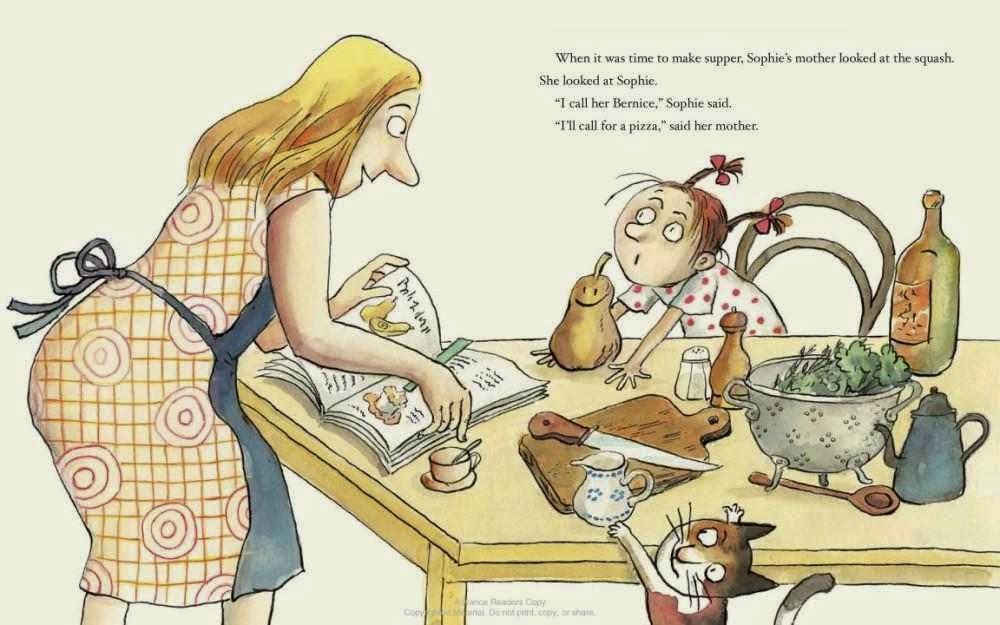 Q: Can you talk about the books that we'll see next from you? Will we encounter Sophie again?

• Wherever You Go. This picture book is coming from Little, Brown in Spring 2015. It’s a rhyming look at the various roads in life with a reminder that everyone controls their own destiny. Eliza Wheeler is illustrating. Yay!

• Sharing the Bread. This is a rhyming picture book for younger readers about a family that prepares Thanksgiving dinner together with everybody pitching in. It’s coming from Schwartz & Wade, and the wonderful Jill McElmurry is illustrating.

• Sophie’s Seeds. There IS more Sophie coming from Schwartz & Wade. In this book, Sophie starts school and explores the ups and downs of having human friends. But don’t worry, Bonnie and Baxter are never far away. Anne Wilsdorf is illustrating again, of course.

• The Quickest Kid in Clarksville. This picture book, set in 1960, tells the story of two girls who idolize Olympic sprinter Wilma Rudolph. They both want to be just like her, and they compete to see who’s the fastest before discovering that not all races have just one winner. This is coming from Chronicle in 2016.

And, I’m always writing new stuff. I think one way to keep yourself sane as a writer is never to pin all your hopes on one story. Have lots of stories going on so you always have something to work on and improve. 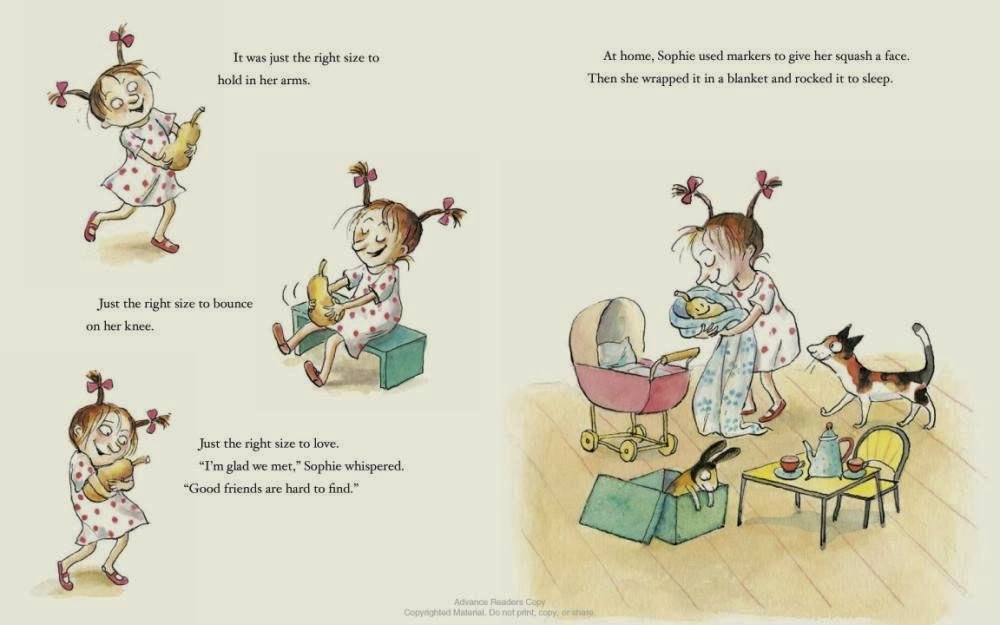 PZM: I want to write books that reflect universal childhood truths. Those little moments that make readers nod (or wince) with recognition. And if I can make people laugh, that’s cool too.

My two favorite responses to Sophie’s Squash came from very different readers. One was an email about a little boy with autism who had fallen in love with a miniature pumpkin after Halloween. He was loving it and asking his mom if he was being a good daddy to it. She was worried about how sad he’d feel once it rotted. So she read him my book and they planted the pumpkin just like Sophie planted her squash.

The second came from a fellow writer who told me her mother-in-law, who has advanced Alzheimer’s, really enjoys the book too. My friend said, “Not many books bring a smile to her face, but this one does. She's always loved babies, and I think her imagination is equal to Sophie's!”

When I hear stories like that, it isn’t hard to sit down at the computer and get back to work.
Posted by Kate Hannigan at 5:30 AM 1 comment: