Ben Hatke and His Hero for All Ages, Zita the Spacegirl 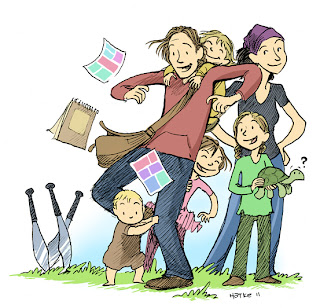 When my second-grade son brought home  Zita the Spacegirl (First Second, 2011), a graphic novel about an intergalactic heroine on a quest to rescue her best friend, Joseph, and find her way back home, he slipped into his own sort of time-space portal just like Zita. He sat down with the book and didn't move until he'd finished reading  it. So off we went to scoop up the sequel, Legends of Zita the Spacegirl (First Second, 2012), from the school library.

But as a sure sign of the popularity of the Zita books, the sequel was checked out. And there was a lo-o-o-o-o-ng list of students who were eagerly awaiting their turn for Book 2. And a quick survey of his classmates revealed that most all of them – girls and boys – had read and adored at least one of the Zita books already.

Zita is conquering the reading universe. And with a third book in the series due to be released this year, we thankfully have more thrilling adventures to anticipate. 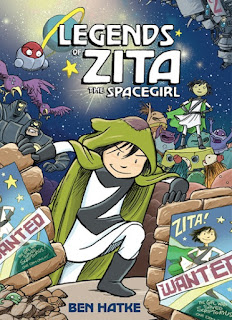 The creative force behind Zita is Ben Hatke, a classically trained artist, writer and comics creator. With a good dose of inspiration from his wife and four daughters, Ben has created a charming hero who leaves all of us cheering – including critics like Kirkus Reviews, which called Legends one of its Best Children's Books of 2012.

Question: Did Zita spring fully formed from your mind? Or did she evolve into the heroine we see in the books?

Ben Hatke: As a character, Zita took years to develop. Also, she’s originally the creation of my wife, Anna.

When I first met this adorable girl in college she showed me some comic strips she had drawn in high school. They featured a futuristic character called Zita the Space Girl. I started developing the character, mostly as a way to impress her. This girl eventually married me, so it’s still the best thing comics has ever done for me.

Those early Zita stories, the ones I made for Anna, were very silly, but that’s where her look started to develop. Later, when I started making short webcomics, I came back to Zita, and she began to get younger, eventually hovering around 10 or 11. And she became more of a world-hopping traveler, lost in space, and she started picking up friends. Her personality also evolved a little bit, and she became more headstrong.

When I got the opportunity to do the graphic novels, it was a chance to finally tell the story of why this girl was drifting from world to world.

Q: Were your wife and four daughters the inspiration for writing the Zita books? And if so, in what ways? 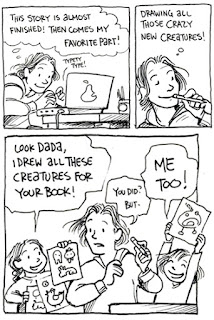 BH: Well, I already mentioned how my wife is the original creator of Zita, but she’s also a big influence on Zita’s character.

My daughters also find their way into the mix. They tend to influence the books in different ways. My eldest girl, Angelica (10), has even made coloring suggestions that have ended up being better than what I was doing at the time.

Also, when I’m writing a book, and before I start the artwork, I run the whole story by my family, verbally, and those initial reactions have a profound influence. When I was telling them the story for Zita 3, nobody wanted to sit down to dinner until I had finished. That was a good sign.

Also, it’s really handy from a drawing standpoint, to have a lot of adventurous kids running around as I try to catch their gestures and movements on paper.

Q: Often it's just the boys who get to be heroes on wild adventures and have all the fun, while girl protagonists are more often the stars of realistic fiction. Were you trying to fill that void with Zita? Why or why not?

BH: I don’t think I was consciously working to fill the void. I grew up with adventurous sisters, and now I have adventurous daughters. I think girl protagonists and adventurers just seem natural to me. 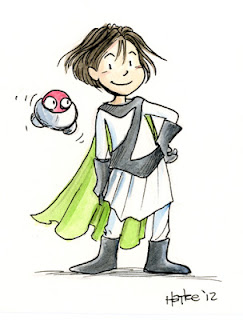 Q: While Zita offers up plenty of girl power, boys adore the stories, too. So often books for children are marketed just to one gender – boy books or girl books. Do you find you have both genders among Zita fans, and that perhaps we underestimate young readers? That a good story is a good story, regardless of whether the hero is a girl?

BH: I think we underestimate readers of all ages! I certainly don’t think of Zita as a boy book or a girl book, or even 100 percent children’s literature for that matter. It’s really a book crammed as full as possible of stuff that I, personally, think is cool.

I’m going for a true all-ages story. Hopefully there’s something for just about everyone to love.

I do find that the letters I get from fans of the books are close to even, gender-wise. I probably get slightly more letters from girl readers, but not a LOT more.

Q: As an author-illustrator, you have not only to write and conceptualize your book, you have to pace it and draw it too. How long does each book take, from idea to finished illustration? Can you speak to the creative process of your books?

BH: Writing, drawing, coloring and lettering a graphic novel takes a lot of time. There’s no way around that. Looking at the three Zita books, Zita 3 went extremely quickly at 9 or 10 months. Legends of Zita (the second book) took about a year and a half to finish. So it averages about a year. 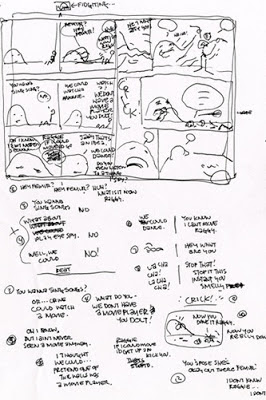 I’m becoming a little more confident in my creative process these days. Getting the framework of the story settled is always the first phase. At this point, the writing and art are still separate. I make outlines on my computer and I also keep a sketchbook, dedicated to the book, for character designs and setting. I’ve learned to work very hard on the story outline.Later, when I start thumbnailing scenes, the writing and art start to come together. Though I work with a pretty solid outline for the story, there’s still a fair amount of detail and dialogue that I get to make up as I go. That’s part of the fun, and it keeps a sense of freshness to the process. A lot of the humor is stuff I probably made up on the fly.

The last phase comes after I have all the linework finished and scanned. I move on to coloring (and lettering). It’s like having a 200-page coloring book. I do my coloring with Photoshop, and it takes a couple months. I put in long hours and listen to a lot of podcasts during this phase!


Q: What's ahead for Zita? And for you? (And what's the story behind the Irish tin whistle?)

BH: The Return of Zita the Spacegirl (Zita 3) is completed and will be out later this year. I had a lot of fun writing and drawing this book, and I can hardly wait to share it with people! 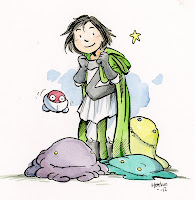 Right now I’m working on a picture book called Julia’s House. It’s about a girl who hangs a sign outside her door that opens her house up to all the creatures no one believes in (trolls, dragons, mermaids, gnomes, etc.) and what happens when they actually show up.

The art for this book is all ink and watercolor, and I feel like I’m getting a good chance to stretch myself artistically. It’s a good feeling! Scary and exciting.

And after Julia’s House? I’ve got a lot of projects cooking. . .

Oh! And Tin Whistles! I usually carry one around in my bag. You know, just in case. . .
Posted by Kate Hannigan at 5:25 AM 2 comments: