Marianne Malone Has the Magic Touch With '68 Rooms' Series 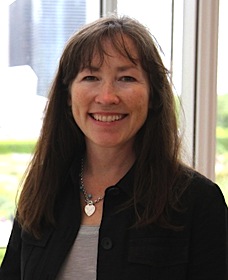 Anyone who has been to the Art Institute of Chicago has probably seen – if not fallen in love with – the Thorne Rooms. A collection of 68 unbelievably realistic miniature rooms, they are designed to showcase furniture and styles of various eras in Europe and the United States. When touring this exhibit, it's hard not to wonder what it would be like to walk through this dollhouse-size world. Author Marianne Malone wondered the same thing, and her debut middle-grade novel The Sixty-Eight Rooms is a fantasy adventure set in these very spaces.

The Sixty-Eight Rooms (Random House Books for Young Readers, 2010) was an instant hit with readers and was named a Chicago Public Library Best of the Best Book and a Parent's Choice Recommended Winner. She followed it up with the sequel Stealing Magic in 2012. And coming this May, she releases the third in the series, The Pirate's Coin. In each book, sixth-graders Ruthie Stewart and Jack Tucker are up for the adventures the Thorne Rooms – and a little magic – have in store.


Question: What inspired you to set your stories in the Thorne Rooms?

Marianne Malone: I grew up in Chicago (born in Hyde Park, we moved to the suburbs when I was little), and I can’t remember a time that I didn’t know of and love the Thorne Rooms. I am not alone in this. Since The Sixty-Eight Rooms came out, I’ve met people who have had the same experience.  The rooms are enchanting and unique in the world. When I visit the rooms, I see stories unfolding in each room, and when I was a child I wanted to be in them in the worst way. I am writing the books that I would have devoured as a 10-year-old. But you don’t need to have seen the Thorne Rooms in person; anyone who has had a small fort, or a dollhouse, or any kind of secret place can understand the impulse. (And of course, they can see all of the rooms beautifully photographed on the Art Institute website).

When I had the idea and started writing, I was inspired by Mrs. Thorne herself. Imagine having the tenacity to stick with such an unusual project! She actually made 100 rooms, only 68 of which are in the Art Institute. But it was quite an obsession, which she carried out with such perfection.

Q: How much fun has it been to write each of these books? And will there be more?

MM: I am having so much fun writing these books! The process pulls together my love of the rooms, my love of art history (my college major), and my love of teaching. My love of writing is newfound, as I always considered myself a visual artist. But I’ve discovered that I approach writing from a visual perspective; the stories come to me as images, like movies. I’ve enjoyed the editing process as well, taking the rough cut and polishing and improving it until the prose is the way I want it, and the pace flows from fast to slow and back again in just the right proportions. 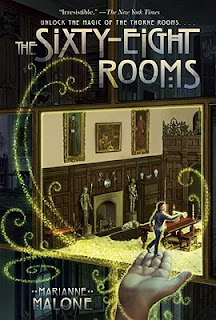 Q: Time travel can be tricky to write. And Ruthie and Jack make trips to periods like 1937 Paris, 19th-century South Carolina, as well as 1753 Cape Cod. How did you handle the historical aspects of your story as well as the sci-fi?

MM: Yes! Time travel can be very tricky. I have on occasion given myself headaches trying to keep the details straight with regard to how the time travel works in my stories. I have made a list of rules – about the magic and the time travel – and it’s important to follow them. Young readers will believe the story if the logic of the magic is consistent. I can invent any sort of magic that I want, but I can’t break my own rules.

I do a lot of research to make sure that the historical facts in the books are accurate. It’s wonderful when I have sent Ruthie and Jack to a certain time in history and it just happens to coincide with something unexpected and exciting. In Stealing Magic, for instance, they go back in time to Paris 1937, mid–summer, during the World’s Fair. And then I discovered that Amelia Earhart took her fateful flight at exactly the same time. I had to include that! 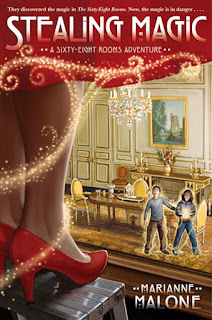 Q: It's great to remind kids (and adults) to look for the magic in everyday life. What do you hope kids take away from your stories?

MM: I hope that kids (and adults) read the books first for enjoyment, for that wonderful feeling of being swept off your feet by a story. I think the magic helps because you can’t recreate that in your real life (I haven’t figured out how to, anyway!).

Second, I hope that my books open the doors to museums for readers who might not be familiar with or comfortable in them. My favorite fan mail has come from parents who say that after reading my books, their son or daughter insisted they go to the Art Institute! I do a lot of school visits, and I like to tell students that they don’t have to like everything in a museum, just find the one thing that speaks to them. I guarantee that they will find that something if they look, and it might even be something that changes their life.

Third, I hope that I’ve snuck in just enough history that readers have an urge to learn a little more. I think art history is a wonderful way to introduce anyone to history; any given object can tell a story of where it came from, whose life it was a part of (and it doesn’t have to be "high" art found in a museum – family memorabilia is a great way to start). That is rather magical to me and a little bit like time travel.

Q: What's ahead for you, and for Ruthie and Jack? 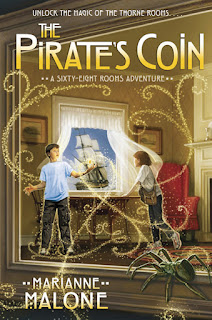 MM: The third book in the series will be out in May, The Pirate’s Coin. I’m so excited about this one. In each book, the danger and the complications of time travel have become more consequential for Ruthie and Jack. Plus, there is a pirate!

And as I write this, I am editing the fourth book (still working on the title!), but I am loving this story, too. Just a couple of hints: they not only visit New York City, but Ruthie and Jack stumble upon an old mystery that they solve by going back to early 18th century England.

As for me, I have several ideas for other books I’d like to write both for the middle-grade audience and perhaps slightly younger. I’d really love to try my hand at combining my own story and artwork in a book as well.
Posted by Kate Hannigan at 5:25 AM