Celebrate Autumn with Wendy McClure's Adorable 'It's a Pumpkin!' 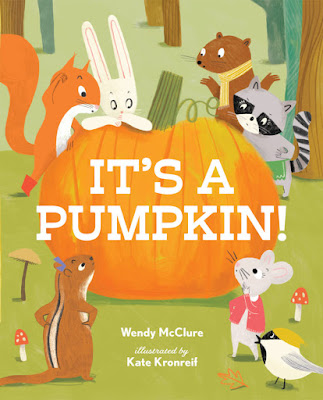 We're almost to October, that glorious time of year when pumpkin spice fills the air and we embrace all things gourdlike. Well, at least I do. Can't get enough of them—pumpkins on the porch, gnarly goosenecks on the coffee table, acorn squash in the oven. Gourdgeous! That's why I fell madly in love with Wendy McClure's adorable new picture book It's a Pumpkin! (Albert Whitman, September 2020),  whimsically illustrated by Kate Kronreif, where the characters explore the many uses of these seasonal wonders.

As both an editor and a writer, Wendy is a familiar face to Chicago writers—and beyond. A dynamic member of the Chicago writing community, she can be found speaking at conferences and workshops and always willing to share her expertise with both aspiring and established authors. Aside from her picture books, Wendy is also the author of the middle-grade historical fiction series Wanderville (Razorbill, 2014, 2015, 2016); is an authority of all things Laura Ingalls Wilder, as demonstrated in her award-winning nonfiction The Wilder Life: My Adventures in the Lost World of Little House on the Prairie (Riverhead Books, 2012); and author of memoirs for adults.

Enter here for a chance to win Wendy McClure's It's a Pumpkin!

QUESTION: This story is delightful, and it's easy to imagine a classroom of kindergartners exploring the many things THEY can do with a pumpkin. Did the idea come to you fully formed? What was your process like in getting this story down?

WENDY MCCLURE: It was an idea that popped into my head around midday at work about a year ago. I was thinking about all our uses for pumpkins in the fall, and how different all these things are, and that Thoreau quote, “I’d rather sit on a pumpkin than a velvet stool,” was bouncing around in there too. At some point dialogue was starting to come to me, so I typed a few notes into a document and saved it. When I got home, I started writing. I had to stop and start over after a couple hundred words in order to get the pacing right, but then I had a draft that night. It’s almost never that fast!

Q: As an editor, you have to think both visually like an illustrator AND about the narrative like an author. Did you wear both hats as you wrote It's a Pumpkin?

WM: I did not! Somehow it did not even occur to me to put that other hat on. I left the pagination up to my editor, Christina Pulles. When Whitman did the illustrator search, I did have a couple thoughts about what the art style should be—I wanted great color, an immersive world, a certain sweetness, but a touch of humor too—and I may have used my editor brain in figuring that out. And when I was shown Kate’s samples I was thrilled. Otherwise, though, I enjoyed staying on the author end of things—less stuff to think about!

Q: It's pumpkin-spice season. Are you all in?

WM: Yes. Give me the tea, the butter, the beer, the bread! I just saw a 6-pack of canned organic pumpkin at Costco and I BET I can find a way to use them all before the year is out. I’ll keep you posted!