Cynthia Grady on a Librarian for Japanese Internment Children 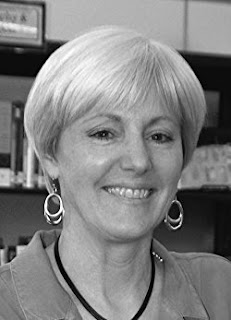 On this date in American history—on February 19, 1942—President Franklin Roosevelt signed Executive Order 9066, which authorized the forced relocation and incarceration of more than 100,000 people of Japanese ancestry into camps located in the the western interior of the United States. Specifically targeting Japanese residents living along the Pacific coast, an estimated 60 percent of those rounded up and imprisoned were American citizens.

History is fascinating but also useful. Crucial. Essential. If we don't know it and learn from it, we truly are doomed to repeat it.

That's why stories like Cynthia Grady's Write to Me: Letters from Japanese American Children to the Librarian They Left Behind (January 2018, Charlesbridge) is such an important book. Illustrated by Amiko Hirao, it tells the moving story of Clara Breed, a librarian in San Diego who corresponded with her young Japanese American library patrons during World War II when these children were locked up in internment camps.
It's a a hard story for kids to understand, but it's useful, crucial, essential for them to know. And to realize that even in the United States, a shining beacon to the world of the principles of tolerance and freedom, that an entire population could be so cruelly treated and see their individual rights as American citizens so heartlessly and systematically trampled.

Author Grady (Like a Bird: The Art of the American Slave Song, I Lay My Stitches Down: Poems of American Slavery) pulled powerful direct quotes from the children's letters, which are archived at the Japanese American National Museum in Los Angeles. I reached out to her to find out more about her creative process in bringing Miss Breed's story and those of her young friends to a new generation of readers. 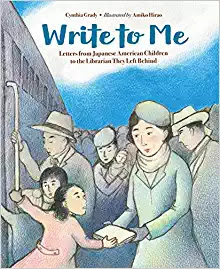 Question: How did you come across this story?

Cynthia Grady: I first learned of Clara Breed's story in about 2002. I had read a review of a documentary that had been put together by the Japanese American National Museum in Los Angeles. The film featured her work on behalf of Japanese Americans during World War II and long afterward, and the children she knew and corresponded with during the war.

I had been a librarian for about three years by then, and I was learning quickly how many librarians, past and present, have worked for social change. I wanted to be that kind of librarian. I wanted to know more about Clara Breed, but I couldn't find anything published—I did find articles written by her and a book she had written, and I learned more about her life by digging into some pretty old documents, but nothing that satisfied my curiosity about her. So, I decided to try to write a book about her myself.

Q: Everyone has a different way of going about gathering information. What was your creative process like?

CG: I began my research with secondary sources—reading all kinds of books about the war against Japan. Then I read published memoirs and poetry written by those Japanese Americans who lived in the prison camps. I visited museums and attended historical society lectures. I read government reports and I listened to congressional hearings that took place decades later.

Finally, I read the letters that the children wrote to Clara Breed. More than 250 letters are held at the Japanese American National Museum. While I knew I wanted Write to Me to be a picture book, I was mistaken, at first, to think I should only use the letters from the youngest children. The teens and young adults detailed the experience of their confinement in a way that the younger children weren't able to, and I'd wanted the letters the children wrote to tell their story as much as possible. 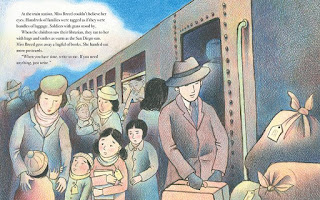 Q: This book is deeply researched, which takes so much time. Did you have some hiccups along the way?

CG: Unfortunately, at that time (about 2006 by now), the letters had not been digitized, so any further research would require me to return to LA. I was living and working in Washington, D.C., at the time, so that wasn't going to happen any time soon.

Like so many stories you hear, this book had a long road to publication. I began sending it out in 2006 and it was promptly returned with kind notes of "this is too slight" or "It feels more like a magazine article than a book." That sort of thing. One publisher asked me to expand it in very specific ways, which I appreciated. I worked on it for another year and resubmitted it. That editor kept it for a year and a half, but finally decided against it, another year later.

In the meantime, I re-worked it as a picture book biography in poems. I'm more comfortable with poetry than anything else, so I decided to play to my strengths. But I heard more of the same from still more publishing houses: "This should be a verse novel rather than a picture book of poems..." "The writing is lovely, but . . . ."

I'd all but given up on the Clara Breed manuscript, and I had expressed my exasperation about the whole thing at a writing retreat in 2014. An editor eating lunch at the same table overheard my conversation and asked me to send the manuscript to her. She had me cut, cut, cut the manuscript so it was back to nearly what I had written in the first place! Then over the following two years, we reworked it, especially the back matter.

Q: Writing teaches us many things as we see a project through. What did you learn along the way?

CG: I discovered through this whole process that I love doing back matter! Writing nonfiction still terrifies me, but I might try it again because I loved writing the end-notes so much.

Each project I've taken on comes together differently, so it's hard to comment on my creative process. I do have regular (almost daily) writing sessions that always begin with poetry, and then afterwards, I dig in to my current project. When the creative juices stop flowing, I usually need to stop, go for a long walk, and begin work on a new quilt, so my writing output is slow going, and my quilting progress even slower.