Sally Walker on Her Huggable Non-Fiction 'Winnie: The True Story'

Sometimes we come across books that we simply fall in love with. For me, I've fallen hard for the Sally Walker's fascinating and adorable non-fiction title Winnie: The True Story of the Bear Who Inspired Winnie-the-Pooh (Henry Holt and Co., January 2015), gorgeously illustrated by Jonathan D. Voss. This is one of those books you leave out on the kitchen table so family and friends can pick it up. It lingers in the imagination, makes other writers smack their heads and wish they'd thought of it first, entertains and informs. Just like the bear on the cover, this book is huggable, irresistible.

Sally, a Chicago-area author of fiction and non-fiction for young readers, including early readers, series, and a long list of non-fiction for older readers, has hit it out of the ballpark with Winnie. It tells the story of a World War I veterinarian named Harry, from Winnipeg, and the bear cub he meets and decides to buy. With detailed endpapers showing photographs of the real-life Harry, Winnie, and a boy named Christopher Robin, Sally takes readers through the sweet story of friendship, caring, and separation. Jonathan Voss's warm illustrations enhance the story beautifully. 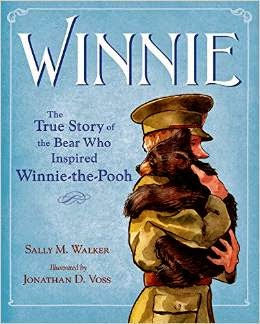 Question: How did you decide to write this story? Can you talk about your creative process from "ah-ha" moment to finished product?

Sally Walker: I first heard of Harry and Winnie at Anderson’s Bookshop in Naperville, Illinois. Mystery writer Jacqueline Winspear was in the store speaking about the latest book in her Maisie Dobbs series, which are set during and after World War I. As an aside, Winspear mentioned the importance of the veterinary corps and their care of horses used in battle. She briefly noted that a Canadian veterinarian, Harry Colebourn, had purchased a bear cub who later inspired Winnie-the-Pooh. Right away, I knew I had to find out if the story was true.

Even though preliminary research seemed to confirm Winnie and Harry’s story, I wanted to confirm what I’d read on the internet in other sources. I contacted Gord Crossley, the archivist at the Fort Garry Horse Museum and Archives (Harry’s first unit), in Winnipeg, Manitoba. Mr. Crossley told me that Colebourn’s WWI diaries were available at the Archives of Manitoba. Interlibrary loan got them for me. In them, Harry notes when he bought Winnie, how much he paid for her, when he brought her to the zoo, and his subsequent visits to her.

I went to the London Zoo, in England, because I wanted to read the materials in the “Winnie Files” in the zoo’s library. They contained a lot of information about Harry, Winnie and her personality, and letters submitted by Fred Colebourn, Harry’s son. They confirmed Winnie and Harry’s relationship. While in the library, I read the Daily Occurrence books, a set of volumes that contain the zoo’s old records—animals donated, the weather, the number of visitors to the zoo, etc. I also stopped by the Mappin Terraces, which were in a transitional stage and unoccupied when I was there in 2012.

With regard to my creative process…so much material ended up on the “cutting room floor”! I started with a much longer book, one for readers age 10-12. But after consideration, my editor Sally Doherty and I realized that most children meet Winnie-the-Pooh at a much younger age. We decided it would be fun for them to learn about the real Winnie at about the same time they meet the fictional Pooh. Approaching the topic of WWI had to be carefully handled.  I needed to provide the wartime setting, but I didn’t want to alarm or upset my audience. Harry’s diaries contained some very fascinating material about caring for injured horses and airplane bombing raids, but that information was outside the scope of my book, which is essentially a biography about Winnie.

I told Winnie and Harry's story in the way that I believe readily and effectively communicates my research and information to very young readers and listeners. 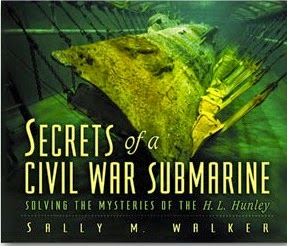 Q: Written in Bone, Secrets of a Civil War Submarine, you've clearly been bitten by the research bug. Do you find story ideas everywhere you look?

SW: Life is a story. All I do is look and listen. The stories find me.

Q: How do you tend to make your decisions about the stories you'll research and write?

SW: If I hear a story and it sticks in my mind—and my heart—day after day, week after week, I pretty much know it’s a tale I want to tell.
Q: I imagine you're committing to a long stretch of research; how long do you typically spend researching your material? 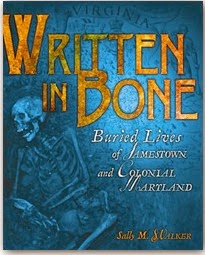 SW: The length of research time totally depends on the story and how hard it is to assemble the material I need to do the story justice. It can range from a few months to as long as three years. If travel is necessary, I have to schedule the trips around other events going on in my life. (After all, I am a grandma who loves to visit her grandson!)
Q: What will we see from you next?

SW: I have a few books in the works. One is with an illustrator who is working on preliminary art. Two others are middle-grade nonfiction: one is science oriented; the other is a historical story (with a smidgen of science!). I really like interdisciplinary tales. They remind us how impossible it is to separate history from science, from literature, from art.
Posted by Kate Hannigan at 6:14 AM 2 comments: