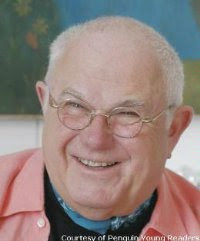 We might as well go ahead and declare Tomie dePaola a national treasure. He's been writing for children for more than 40 years now, illustrating about 250 books and authoring about 100 of them. His best-known titles are the 11 books in the Strega Nona series, for which he won a Caldecott Honor, and the 26 Fairmount Avenue series, for which he won a Newbery Honor. Aside from being able to boast that he's sold more than 15 million books, Tomie can also claim a wall full of accolades. 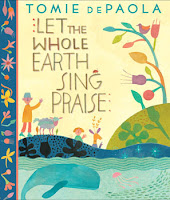 His work has earned him a Smithson Medal from the Smithsonian Institution, and in 1999, he was honored with a Living Treasure Award from New Hampshire's governor. And the biggie to beat all biggies, in 2011 he was given the Laura Ingalls Wilder Award for his "substantial and lasting contribution to literature for children."

His most recent titles, Let the Whole Earth Sing Praise (Putnam) and Strega Nona's Gift (Nancy Paulsen Books), were published in 2011. Not bad for a storyteller who will turn 79 this September. 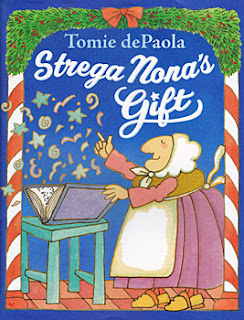 With all the celebrating of his Italian heritage in Strega Nona and other titles, it might be easy to forget that Tomie dePaola's other half is Irish. And it's those books that are in the spotlight this week as we approach St. Patrick's Day.

When March 17th rolls around, teachers, librarians, and parents scan the bookshelves in search of good books to share for Ireland's big day. And Tomie's books are among the best: Fin M'Coul, The Giant of Knockmany Hill (Holiday House, 1981) is a rip-snorting example of Irish folklore and witty storytelling. His Patrick, Patron Saint of Ireland (Holiday House, 1994) gives a wonderful history of the man behind the holiday, blending Irish superstition with Catholic tradition. Also not to be missed are Tomie's stories from his grandfather, the adorable Jamie O'Rourke and the Big Potato (G. P. Putnam's Sons, 1997) as well as Jamie O'Rourke and the Pooka (G. P. Putnam's Sons, 2002).

Question: What inspired you to tap your Irish roots and write Patrick, Patron Saint of Ireland, the Jamie O'Rourke books, and Fin M'Coul? 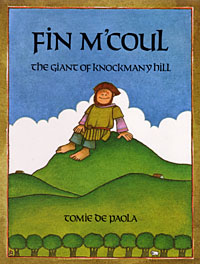 Tomie dePaola: When Strega Nona was chosen as a Caldecott Honor Book, my Irish American mother said to me, partly joking but ultimately serious, "OK, honey, enough with the Italian. Don't forget you're half Irish." There's nothing like a mother's "nudge" to get the creative juices going.

Irish folktales that are suitable for younger children are literally few and far between. There tends to be a lot of whiskey involved, especially in the tales I researched. (Yeats collected many such folktales.)

I found the stories of Fin M'Coul to be the most child friendly. But doing what a good storyteller is supposed to do, I was able to find funny incidents in a handful of other tales. I then created a typical Irish character directly stolen from my Irish grandfather's stories that he loved to tell me when I was a child. (My English/Irish grandmother referred to these stories as "your" grandfather's lies.) 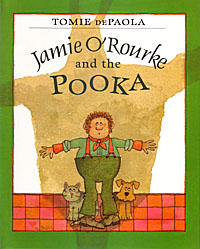 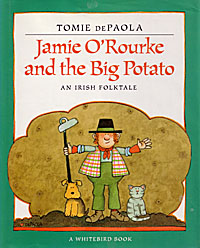 Hence, the Jamie O'Rourke stories. I can still hear my grandfather's voice saying, "Jamie O'Rourke was the laziest man in all of Ireland."
St. Patrick was a no brainer. I was already doing the lives of saints that I found interesting, and Patrick was a prime candidate.

Q: While your Italian and Irish heritage is clear in your writing, you have also tapped into other cultures and traditions in many other books – from Adelita, A Mexican Cinderella Story to The Legend of Bluebonnet. What do you hope to accomplish with the books you write? And what do you hope young readers take away from your books? 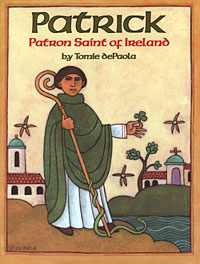 TDP: It's natural that I'd be interested in other cultures because as a child I found out how exciting it was to be the child of two different cultures, Italian and Irish. That sent me reading everything I could of other people's worlds. That stayed with me as I grew.

The only thing I hope to accomplish with my books is to "grab" children's interest, inspire them to be excited about things, to laugh and maybe even cry. In short, to truly touch their lives.

Q: One hundred years from now when readers talk about your books, what do you hope is said about you?

TDP: I just hope 100 years from now, there are books, and mine are among them, and people, especially children, like them.
Posted by Kate Hannigan at 5:25 AM 2 comments: