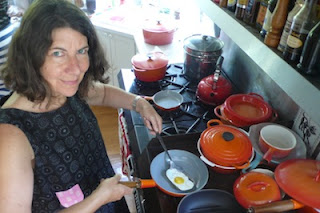 Some books are clearly for kids. And others are for the kid in all of us. Author and illustrator Jessie Hartland's Bon Appetit! The Delicious Life of Julia Child (Schwartz & Wade, 2012) is for everyone, young and old, who shares an interest in the food that's on our forks.

With Bon Appetit!, which is a 2013 Amelia Bloomer Project title and earned a starred review in Publisher's Weekly, Jessie takes readers on a journey through the life of Julia Child the chef, the cookbook author, and the television star. And what material to mine. Julia Child grew up in California, but her adventures took her to Europe where she worked as a spy during WWII. We see her as a student, attending cooking classes in Paris. We see her struggle with her writing as she tries again and again to publish Mastering the Art of French Cooking. And we see her searching to find her "thing," awkward – the size of her feet are laughably long – and unsure. All are moments young readers especially can relate to. With a distinctive illustrating style and hand-written text, Jessie has created a lush book that is dense with information about this culinary and cultural icon. 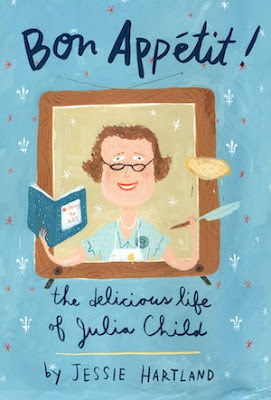 You might also recognize Jessie's work from her Museum titles with Blue Apple books. How The Sphinx Got To The Museum (2010) tells how the sphinx of the Pharaoh Hatshepsut wound up in New York City's Metropolitan Museum of Art. How the Dinosaur Got to the Museum (2011) explains how a Diplodocus longus landed in the Smithsonian. And coming this fall, How the Meteorite Got to the Museum (October 8, 2013), chronicles how a meteorite ended up in the American Museum of Natural History.

Question: You're one of those rare birds who can tell a delightful story in both word and picture. And you don't just touch the surface – you dig deep. With Bon Appetit! packed full of so many historical details, can you explain what inspired you to tackle such an enormous project? Why a picture book about Julia Child?

Jessie Hartland: Thanks for the kind words! The book was my idea. I love to read biographies and I wanted to do a series of “graphic biographies” for children,  my own way. I pitched Julia Child as the first in the set. This was about five or six years ago, before Nora Ephron’s film Julie & Julia. The response I got was “…no one cares about Julia Child anymore.” However the film revived interest in Julia, and I am so grateful to have been given the opportunity to do the book. Q: You clearly did your homework in researching Julia Child's life. Was it hard to decide what you wanted to include in the story and what you had to leave out? Did you feel that you had any constraints?

JH: Well, I had a limited number of pages to work with: 48. More than the typical picture book of 32 pages, but not so many to cover the life of a busy person like Julia Child! I knew I wanted to spend plenty of time on the long and laborious process of getting the first cookbook published and to show how complicated and accomplished her cooking was, hence the 32-step galantine recipe.

The part I miss cutting most is a page when Julia has just moved to Germany and hasn’t yet mastered the language. She’s working on the poultry chapter of Mastering the Art of French Cooking and must visit a German butcher to buy ingredients. She flaps her “wings” and honks and quacks to communicate. The butcher responds, “Ach! Das Gans.” “Ya! Das Huhn!”

Q: Most people think of picture books as geared for a young audience, but Bon Appetit! appeals to the chef in all of us – at any age. Were you writing the story with a particular reader in mind, or with a broad audience of anyone who appreciates good food?

JH: Well, I started out writing this book for kids but then it got more and more complicated. I hope there is something for everyone in there.

JH: Yes, I love to cook. I grew up watching The French Chef on TV. My mother did not like to cook, and it was fun to watch someone cooking who enjoyed it. At home we ate frozen vegetables, canned fruit, and dreadful things made with soup mixes and such. As a teenager, I got an after-school job in my town’s only fancy-foods shop, where I had my first croissants, baklava, and French cheese.

While in art school I worked weekends and summers as a restaurant cook. Nowadays our family eats a lot of seafood caught by my 21-year-old son, Sam: tuna, sea bass, bluefish, porgies, mahi-mahi, and cherrystone clams. I grow tomatoes, cucumbers, and raspberries and have a thriving herb garden. 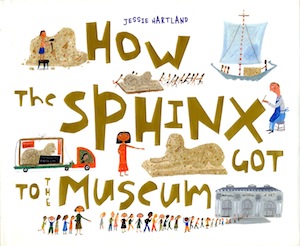 JH: For the Julia book, I want readers to get a sense of Julia’s perseverance and all the hard work and years it took to get her first cookbook published. I also like how she was a free spirit,  a rebellious soul,  a late-bloomer, and was a feminist before there was such a word.

Q: Can you talk about what we'll see next from you?

JH: I’m in the middle of another biography, this one of Steve Jobs. It is targeted to older kids, though, and will be even more of a middle grade/adult crossover. It will have a  smaller format,  with many more pages and printed in black and white. It’s now at 186 pages and will be coming out in 2014. More focus on the writing and line drawings—and I’m up for the challenge! He’s another fascinating character: rebellious, intuitive, ingenious. . . 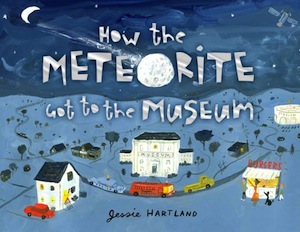 But next coming out is the third in my Museum series of books — How the Meteorite Got to the Museum. It’s about the Peekskill meteorite and the amazing story of a rock that fell from space and landed on a parked car in the town of Peekskill, New York. And in this same series, for the fourth book I’ll be working with MoMA, NYC’s Museum of Modern Art, exploring the provenance of an object in their design collection.

Q: What do you hope to accomplish in your writing and illustrating life?

JH: Having done picture books for some years now, I’ve been saying I’ve wanted the challenge of doing both a book without pictures, just words—and a book with no words, just pictures. So I have just taken a stab at writing a chapter book. We’ll see if someone will publish it!