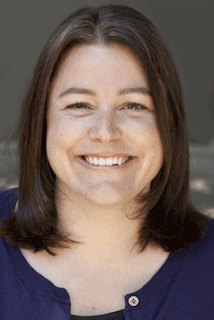 Kristen Kittscher's The Wig in the Window (HarperCollins, 2013) is one of those books that hooks you in from the first page. And it shows the power of a fantastic title: I recall stumbling across this book for the first time in spring, and the title stayed with me. Later when I read a review, I thought the premise sounded fantastic. And finally, when I popped into the bookstore over the summer, the title was easy for my addled mind to recall as I wandered the stacks.

The Wig in the Window tells the story of seventh-grade BFFs Sophie Young and Grace Yang, budding spies who have made a game of snooping on their neighbors. When they witness what they think is a murder, things begin to spin out of control. The suspect: their middle-school counselor, who was wielding a red-stained cleaver. There are enough red herrings to throw off even the most discerning young readers and keep the pages turning. Kirkus describes Wig as "Reminiscent of the ever-compelling film Rear Window, this appealing and often spine-tingling tale will leave its audience wishing for more." 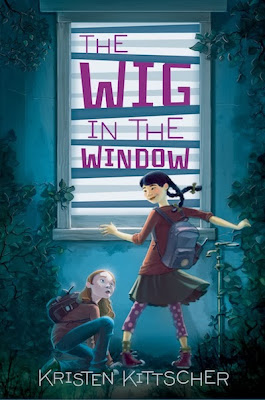 Question: This book is fast-paced and full of thrills from the word go. Where did you get the idea for The Wig in the Window? And did you know the title from the moment you sat down to write the story?

Kristen Kittscher: When I was in sixth grade, my best friend and I had lots of far-fetched theories about our neighbors and pretended we were spies. We even had a “spy headquarters” in a loft above her garage where we made fake “Most Wanted” posters and spy badges. The Wig in the Window was inspired by those memories of childhood spy games. I wondered: what if there had been a fugitive in our neighborhood? Alfred Hitchcock’s Rear Window is one of my favorite movies – I thought a Rear Window for kids had some fun possibilities.

As for the title, the book actually sold to HarperCollins as “Untitled Middle Grade Mystery.” As I was drafting, I always referred to it as “Young and Yang” because Sophie Young and Grace Yang’s friendship is at its heart. The process of coming up with a new title was pretty funny. I talk about it and share some of the editorial correspondence here.

Q: I loved how these characters were not just "strong girls," one of them was quoting Sun Tzu, philosopher and author of The Art of War, throughout the book. Are you schooled in the art of war yourself? What made you incorporate strategies for defeating enemies into your mystery novel? What made you write such strong, capable girls?

KK: I wasn’t schooled in The Art of War before writing Wig, but I can certainly hold my own now. I joke that the book is a psychological thriller for tweens, so Sun Tzu’s battle advice was perfect for Young & Yang’s cat-and-mouse game with their school counselor.

I also incorporated Sophie’s interests because I wanted to explore a common theme I’d seen while teaching middle school: kids often take on other cultures and identities while trying to figure out their own place in the world. They look for things outside themselves to give them a little boldness. It can be very problematic and lead to tensions in friendship, as Sophie Young discovers. What is the line between appreciation of a culture and appropriation? I’d wondered it myself as I watched my students get really into manga, for example.

I'm glad my characters' strengths comes across! I taught at an all-girls’ school for many years; I don’t know any girls who aren’t strong and capable, so they just came out that way as I wrote! I’m so pleased that kids are finding them empowering. Confident Trista Bottoms is definitely a favorite of mine – and I find myself channeling her when I’m feeling unsure about myself, too.

Q: Mysteries have lots of loose ends that need tying up, and they have to maintain a certain tension throughout. How hard is it to write a mystery? And why did you choose this genre?

KK: The Wig in the Window is the first thing I’ve written, so I have difficulty comparing the difficulty of writing a mystery over any other kind of writing. It’s all hard! I do know that it seems to take me longer than others to write. Whether that’s because of the intricacies of plot construction, the number of revisions it takes to get the humor timing right, or because it’s tricky to keep things moving while still exploring the friendship, I’m not sure.

I love page-turners and being surprised, so the idea of creating that experience for kids delights me to no end! I also think it complements thematic obsessions of mine. Doubt (and self-doubt) are the twin engines that propel a mystery plot, so mysteries are perfect for traveling with a character on a journey from insecurity to greater confidence. (Which, in turn, is perfect for tweens trying to shed their own self-consciousness and figure out where they fit in.)

Q: Will we see Agents Young & Yang again for another adventure? What is your next project?

KK: You will! I am working on the sequel, The Tiara on the Terrace. Young & Yang (and their new friend Trista Bottoms) go undercover in their town parade’s beauty pageant to stop a murderer. I think of it as a sort of Miss Congeniality set in middle school.

I hope to make kids laugh out loud and entertain them while inspiring them to be confident and take themselves seriously. I hope, too, my stories help them through a few tough moments in their friendships!
Posted by Kate Hannigan at 5:25 AM No comments: