Judith Bloom Fradin's remarkable writing career has spanned three decades already. And there's much more still to come. Writing with her husband, Dennis Fradin, who passed away in August, they have produced more than 150 non-fiction books for children and won countless awards, such as the ABC Choice Award, IRA Teacher's Choice Award, and School Library Journal Best Book of the Year. They have made a tremendous contribution to feeding hungry minds with fascinating information on topics ranging from tsunamis to Sacagawea to slavery.

Their most recent recent books include Zora! The Life of Zora Neale Hurston (Clarion Books, 2012), which gives a detailed and fascinating account of the life of the Harlem Renaissance darling and author of Their Eyes Were Watching God; and The Price of Freedom: How One Town Stood Up to Slavery (Walker, 2013), about how the townspeople of Oberlin, Ohio, banded together to protect a runaway slave. 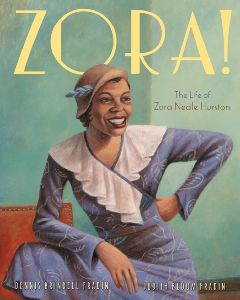 Question: Many of your books focus on African American history and the lives of prominent black Americans. What has inspired you to write stories like Zora! and The Price of Freedom?

Judith Bloom Fradin: Dennis and I got hitched in March of 1967. The following September, we both started teaching in all-black schools. I taught English at Marshall High School on Chicago's west side and he taught second grade across the street at Faraday Elementary School. Since we only had one rickety used car, that worked well for us.

Both schools were educational wastelands. Classes were large. There were few books in either building worthy of our eager-to-learn students. The literature anthologies at Marshall contained brief excerpts from novels and plays, most of those less than riveting. Once Dennis's second-graders learned to read, there were no engaging books for them. So we took matters into our own hands.

I had my students purchase a paperback called Black Voices, a compendium of African-American prose, poetry, drama and essays by the likes of Langston Hughes and Countee Cullen and Gwendolyn Brooks and James Baldwin and Richard Wright and Malcolm X. Dennis held his second-graders' attention at the end of the day by spinning stories about remarkable figures in black history. The deeper we delved into these topics, the more intrigued we became. One thing led to another, as Dennis loved to say. . .

Q: You and Dennis have been prolific writers. Where does the spark of an idea for a book come from?

JBF: During the second half of the 1990s, we worked together on From Sea to Shining Sea, a series of state books. The last full chapter of each book focused on that state's famous people. The seeds of many future Fradin books were found in the course of researching those chapters. 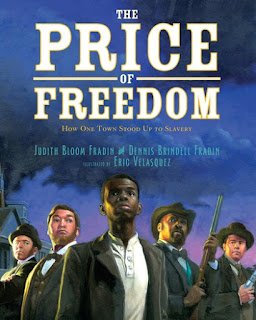 In other cases, a publisher asks us to do a series of books, such as the Marshall Cavendish series Turning Points in U.S. History, or we collaborate at designing a project like the Witness to Disaster series we wrote for National Geographic Children's Books.

We've had the good fortune to work with many of the best editors in the business on these various projects. But our favorite books are those born from ideas that we propose.

Dennis's favorite of those was his Samuel Adams: The Father of American Independence (Clarion).  He loved reading and writing about colonial history. My personal favorite thus far is our Ida B. Wells:  Mother of the Civil Rights Movement – also a Clarion book. One "Father," one "Mother." I think Ida is my favorite because it's our first literary child – the first extensive book we worked on together. Also because Ida B. Wells-Barnett was a complex, difficult, intrepid, and mesmerizing woman.

Our Clarion biographies paved the way for our other stand-alone books like 5,000 Miles to Freedom, Stolen into Slavery (both National Geographic Children's Books), and The Price of Freedom (Walker).

Q: The details you include in books like Zora! – such as when she finished her manuscript to a book but could not afford the $1.83 it cost to mail it to her Philadelphia publisher – are fascinating and lend so much to the richness of your biographies. How much research do you do for your books? And how long does it take to write them?

JBF: I like to tell schoolchildren that my name is Judy "Research" Fradin. I LOVE research. For Dennis, library research was his means to the end of writing the book. For me, the picture research is primary. Ultimately, the two are endlessly intertwined, pulling us and, we hope, our readers, deeper and deeper into our story.

JBF: We're both drawn to the quirky story that either hasn't been told before or that has been forgotten. There are still a few such Fradin books in the pipeline!

Q: Considering your body of work, what do you hope to accomplish as a writer?

JBF: I can't speak for Dennis, who has accomplished so very much. We frequently spoke, however, about non-fiction as a method of reaching a wider group of students.

JBF: Again, speaking for myself, I'd hope our books would inspire students to read more non-fiction, discovering how fascinating our world can be. Just call me a cheerleader for non-fiction!
Posted by Kate Hannigan at 5:25 AM No comments: