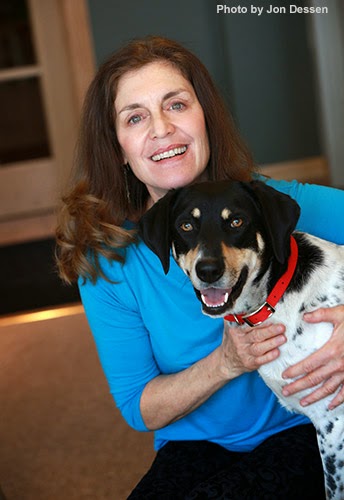 Josephine Baker's fascinating life has been examined in books, films, and documentaries. But perhaps none is so beautifully done as Patricia Hruby Powell's picture book Josephine: The Dazzling Life of Josephine Baker (Chronicle Books, January 14, 2014). Illustrated by Christian Robinson, Josephine tells the inspiring story of this boundary-breaking performer and champion for racial equality. A biography written in verse, Josephine is already collecting a jewel box of starred reviews, including one from Kirkus that says it's "celebrated with style and empathy."

Question: You're a former dancer, so it's easy to see the interest you might have for writing about another dancer. But why Josephine Baker? What drew you to her story?

Patricia Hruby Powell: It wasn’t till I hit my more advanced adult years that I took a close look at Josephine and was smitten. Her style, verve, her originality—as seen in the early film footage and the three movies she made—are irresistible. But when I was a serious young dancer—of Graham, Limon, and Cunningham techniques and of ballet, who became a choreographer and concert dancer—I did not take Josephine Baker seriously.

In my more recent capacity as a children’s librarian, surrounded by unfocused preteen African American girls, I thought Josephine could be a wonderful role model. Josephine had phenomenal confidence. Blind confidence, perhaps. That’s what drew me. 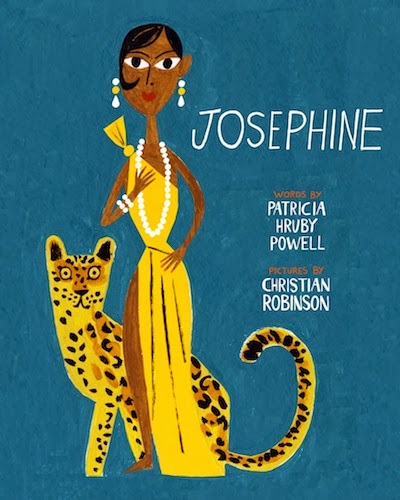 Q: Josephine is both beautifully illustrated, immensely informative, and well-written. And it clocks in at a whopping 104 pages! It is not every picture book that gets an editor's green light to reach 100 pages! How did you win over your editor? Did the size of the book begin to worry you at any point?

PHP: Josephine evolved, you might say. I’d written it first as a 1,000 word picture book, received a lot of agent and editorial attention, but ultimate rejection. I then wrote it as a YA verse piece imagining Paul Colin-like black and white illustrations. Never mind that there’s really no such thing as a novella-length verse YA volume, I was writing what I wanted, as we’re always advised to do.

I was monumentally lucky that my eventual agent picked Josephine out of a cover letter description—I mean it’s not what I was submitting to her—and she asked to see it, liked it, and offered representation. That was in December 2009. That 7,500-word Josephine received praise but, again, ultimate rejection. Until…

An inspired editor at Chronicle asked me to cut the word count in half. Which I did. My dream editor acquired Josephine in October 2010, and we added some of those deleted stanzas back in.

My editor intended a long picture book of 48 pages, I think. Then it was 64 pages. When I was told it would be an astounding 104 pages, I panicked. What was this book going to cost? I was told a normal $17.99. I calmed down. All along the way, I was told how much everyone at Chronicle loved the book. So I guess they were taking a chance. Which made me feel terribly responsible. I’ve got to say, I’ve felt panic along the way on numerous occasions. 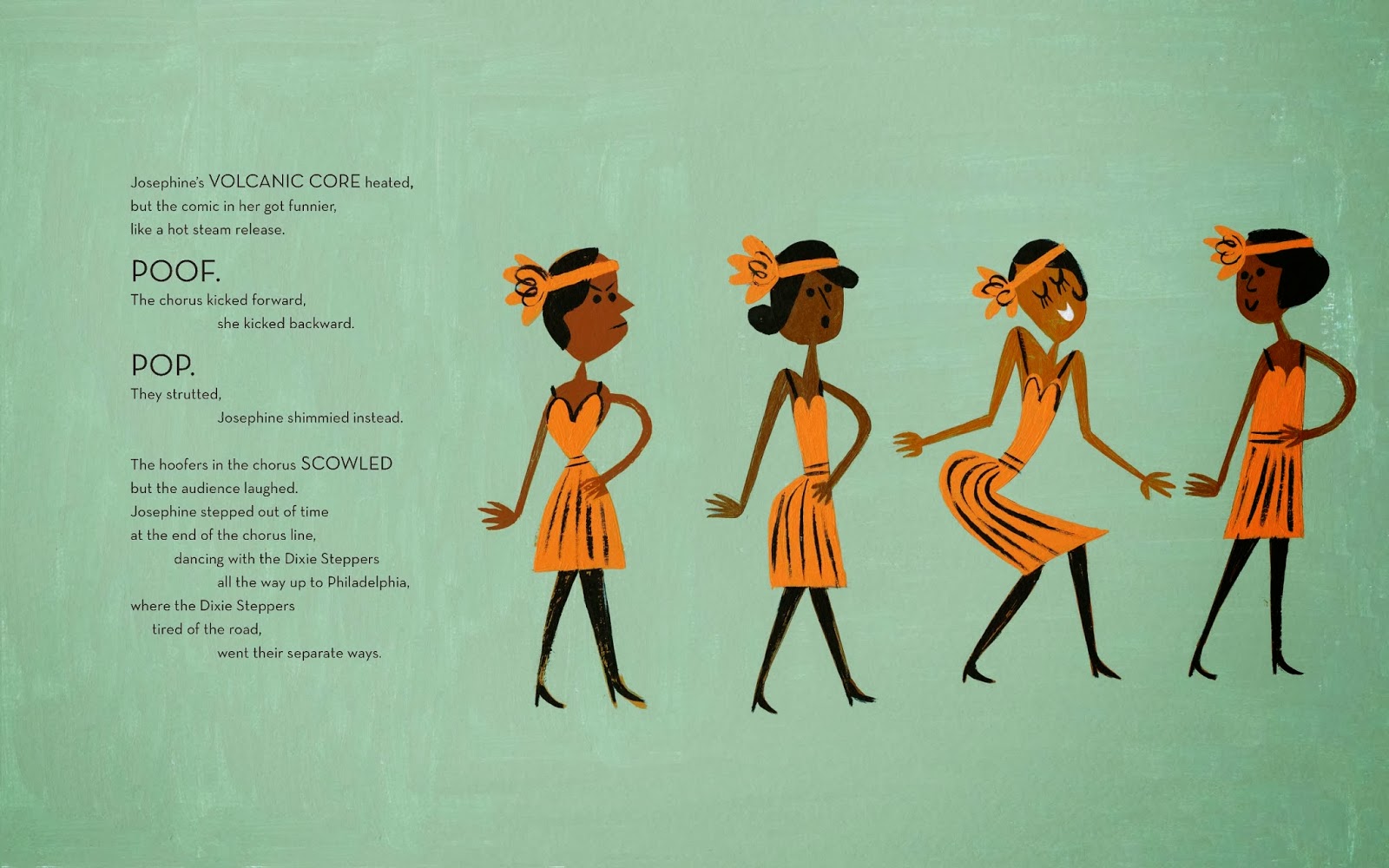 Q: Could you talk about your creative process? The personal recollections from Josephine Baker are woven into the storyline seamlessly, but this must have taken a lot of writing and revising to pull off. How long did you work on this manuscript, both researching and writing?

PHP: Josephine was a storyteller. She wrote five autobiographies—all in French—which required me to kick-start my school French. But those autobiographies supplied plenty of quotes.

Josephine Baker was overly energetic, which leads to hyperbole. I had to tease out the truth, or what I saw as the truth of her story. There are wonderful English language biographies as well. But some writers believed all her stories. I’d read so much about her, from her, and viewed so much footage and listened to her interviews on obsolete recording technology (thank heavens for the University of Illinois Library) that I felt I knew her extremely well.

My Josephine had a long path to publication. But I was also working on other manuscripts over those years from 2005 to the 2014.

Q: Razzmatazz, vagabonds, ramshackle, effervesced! Your word choice is rich and full of meaty, mouth-filling words, and choosing to write in verse lends an urgency to the book's tone. It is clear you labored over every word. Can you talk about your decisions for word choices and writing style?

PHP: I love words. I create a word bank for each of my books. When I hear or think of or read a word I might use, I write it down. Bits of paper are scattered throughout my house. And my purse. Yes, I have notebooks and legal pads, too. Hopefully all the words will get gathered and transferred to the computer or a 3-by-5 card.

Josephine is a subject that invites scintillating words. Who knows how razzmatazz got in my brain? Josephine put it there. I tried to become Josephine to see how she felt—so I danced her. She danced me some of those words. 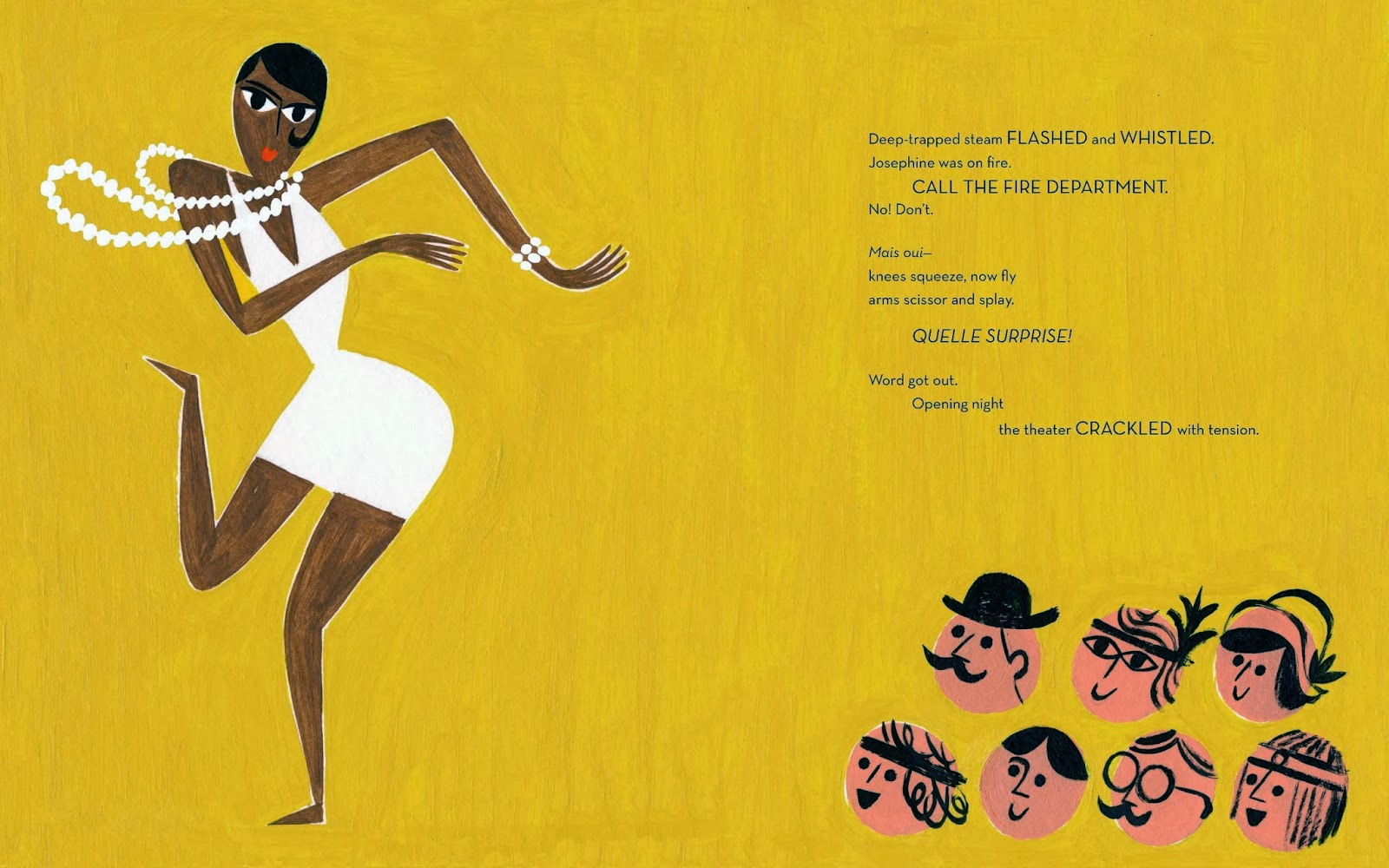 Q: I thought I was familiar with Josephine Baker's life story, but your book delivered some wonderful surprises. Were you already aware of her war service and piloting experience? Were there moments when you were surprised by Josephine's life?

PHP: I knew only the bare facts when I began. I was surprised all along the way. And in immense admiration of her.

Q: What do you hope young readers will take away from your story?

PHP: A YA documentary novel in verse (working title: Loving vs Virginia) about the interracial couple Mildred Jeter (black) who married Richard Loving (white) in Virginia, 1958. Interracial marriage was illegal in 24 states in 1958. The Lovings were arrested in bed, banished from their pastoral home to the slums of Washington, D.C. It took nine years before the U.S. Supreme Court ruled in their favor. It’s a love story.
Posted by Kate Hannigan at 5:25 AM 5 comments: