This week I'm departing from my standard operating procedure of interviewing other children's authors about their books. Instead I'm participating in a sort of blogger chain letter called the Next Big Thing. It's a blog tour that bounces from one writer to the next, throwing the spotlight on our individual writing projects.

The Next Big Thing blog tour started in Australia as a way for authors and illustrators to bring awareness to their work by way of their blogs. Many thanks to the lovely and talented Brooke Boynton Hughes, illustrator for our forthcoming book Cupcake Cousins from Hyperion/Disney, for tagging me and inviting me to participate. Brooke is also awaiting the arrival of the bouncing bundle of joy Baby Love by Angela DiTerlizzi (Beach Lane Books/S&S).

Here are official the Next Big Thing blog tour questions:

Question: What is the working title of your next book?

Me: The title for the book is Cupcake Cousins, which makes me hungry every time I type that out. When I submitted my manuscript to Hyperion, the working title was The Flour Girls, because my story is about two almost-10-year-olds who have been asked to be flower girls in their aunt's wedding but would much prefer to showcase their cooking skills by baking for the reception. What makes the story a bit different is that Delia and Willow, my two budding chefs, are cousins – one African American and the other white. So Hyperion thought we should emphasize their connectedness right up front rather than on my oh-so-clever wordplay.

Q: Where did the idea come from for the book? 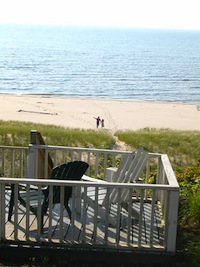 Me: The story is set in a sleepy Michigan beach town called Saugatuck. I live with my husband and three children in Chicago, and every summer we escape the landscape of high-rises and crowded streets for the open stretches of Western Michigan – just like the character Willow. There are endless opportunities for old school fun like going on hikes, building sand forts, picking berries and peaches, and roasting marshmallows around a campfire. We typically rent a beach house for one week every August with the kids' three cousins from Detroit – which is where Delia's family lives.

Two things were at play when I got the idea for the book. One was watching the special relationship cousins have. There's not the tension that siblings can develop, but there's still the deep devotion. No matter how different they are, no matter how many months they go without seeing each other, they are still so close. I wanted to celebrate that a bit.

The second factor was how fast kids grow up these days. It's not uncommon to pass third-graders at my kids' school reading Hunger Games. It makes me a little sad for them, that at eight years old they are plunging into such emotionally wrenching topics. Where's the magic of childhood? So I set out to write a book where the stakes were not too high (spoiler alert: the dog in this book does NOT die), and the issues, while still very dear to the cousins' hearts, were not so enormous.

Q: What genre does your book fall under?

Me: It's early middle-grade.

Q: What actors would you choose to play the part of your characters in a movie rendition?

Me: The most fun would be casting the loopy adults in this book. There is a Southern chef who endures the girls' cooking aspirations, and I was completely channeling Paula Deen. She is pursued by a charming gentleman who owns the beach house, and I pictured William H. Macy with all his goofy cuteness.

Q: Who is publishing your book?

Me: I couldn't be happier to type these words: Hyperion/Disney. It's been such a fun ride!

Q: How long did it take you to write the first draft of the manuscript?

Me: I had been writing for a while before the Cupcake Cousins story idea came to mind. And I am a slow writer who agonizes over every word. Then I went to a book talk where a friend was celebrating the release of his latest novel. He said he wrote his whole book, opening line to ending, in a matter of two months. That blew me away, so I made it my goal to get the first draft of my cousins book out in about six months. Then I revised and revised and revised over a year.

Q: What other books would you compare this story to within your genre?

Me: I really admire Jeanne Birdsall's middle-grade series The Penderwicks. It is dense with relationships but still feels light and sweet as four sisters share hilarious summer adventures with minimal fighting. It was an instant classic when it came out. So that book was at my side as I wrote, as was Anne of Green Gables for many reasons but especially the sly humor and wonder of nature. The story also takes inspiration from Gone Away Lake, a 1958 Newbery Honor winning book by Elizabeth Enright, which also features kids experiencing nature and freedom and the joys of summertime.

Q: Who or what inspired you to write this book?

Me: At the same time that all this soup was simmering in my head, I was also reading Last Child in the Woods, a book about the way we raise children to ignore if not fear being outdoors in nature. I grew up in Oklahoma, and remember my summers as being months of freedom spent outdoors. June, July, and August were for tearing around our neighborhood, splashing in the creek, eating plums from neighbors' trees, catching bugs, and playing endless games of kick-the-can and hide-and-seek until it was dark out. Then we'd start it all over again the next day.

Oh, and I recall never ever wanting to bother with bathing – it slowed me down from all my playtime. So my characters take a bit of that from me and my childhood.

Raising my kids as city folk, we take advantage of so much of what Chicago has to offer. But I do mourn their loss of freedom and connectedness with nature. We have to seek it out. And we're lucky that way – we are able to have a weeklong getaway and unplug. But many kids aren't, and they don't know the joys of spending time outside. How many kids today have actually watched the sun set? Or caught it rising in the morning? Or picked fruit from trees and bushes? I wanted to try to put these sensations into a book, to remind kids that it's all out there for them to discover.

Q: What else about the book might pique the reader's interest?

Me: There are fun recipes interspersed throughout the story! There are jokes! And there's a very large, highly irresistible dog!

Now it's time for me to tag: Check out Amy Timberlake's Next Big Thing entry on her blog. Amy is the author of the remarkable middle-grade One Came Home. Check it out if you haven't already!

And bounce on over to Liesl Shurtliff's place and learn more about what she's working on. Liesl's wonderful middle-grade Rump upends the traditional Rumpelstiltskin fairytale. (It's really hard not to get punny with Rump.)