Helen Docherty's 'Snatchabook' a Whodunit for the Wee Ones 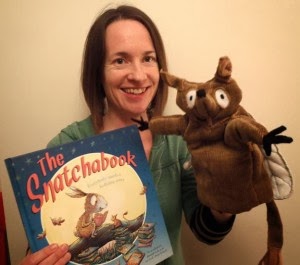 Helen Docherty's name might not be a familiar one to American households, but it will be. A native of Britain, her debut picture book hit shelves on October 1 here in the United States and is being published simultaneously in the United Kingdom, the Netherlands, Sweden, Italy – a total of 16 countries in all. With gorgeous illustrations by Helen's husband, Thomas Docherty (Ruby Nettleship, The Snorgh and the Sailor), a charming premise, and lively rhyme, it deserves the wide audience.

Titled The Snatchabook, it is the adorable story of bedtime in Burrow Down, where all the children's books are disappearing. When one little girl decides to stay awake and catch the book thief, she discovers it's a cute little critter called the Snatchabook. His complaint is a simple one; he just wants someone to tuck him in at night with a story.

With a nod to both Dr. Seuss and Julia Donaldson's The Gruffalo, The Snatchabook is what Publisher's Weekly calls "a winner in this heartwarming tribute to the essential role of bedtime reading in the lives of families." 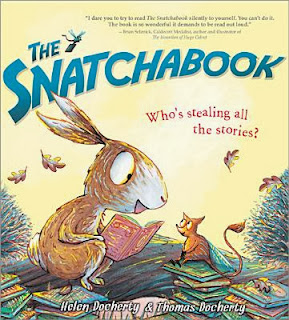 Question: When I first picked up The Snatchabook, I thought "instant classic." This idea is adorable and makes writers like me smack their foreheads and say, "Genius! Why didn't I think of it?" Where did you get the idea for The Snatchabook? What was your creative process like?

Helen Docherty: I came up with the idea at the end of a really long, hard day of trying to think up new ideas for stories, but not really getting anywhere. The words "book thief" suddenly popped into my head and with them the idea of a mysterious thief who steals books in the night. I started to jot down potential names for this creature: a book cruncher? A book snatcher? Then I realised that if I inverted these to create a Snatchabook, I could potentially rhyme this with other words; and also, a Snatchabook sounded less menacing, somehow.

I knew that I wanted to set up a kind of whodunit with a brave heroine (Eliza) and a surprise twist. After that, the story started to form itself pretty quickly on the page – within a few hours, I had written half of the very first draft, and I knew how I wanted the story to end. Of course, it took several more days to complete a finished draft that I was happy with, and then many more re-edits and tweaks followed.

Q: Writing in rhyme is no easy feat, and new authors are often discouraged to attempt it. But when reading Snatchabook aloud with a young audience, the rhyming is part of the story's incredible charm. How challenging was it to get the rhyme right? Did you look to Seuss and The Gruffalo for inspiration?

HD: The Snatchabook was actually the first rhyming picture book text I had ever written (although as a child, I loved to write in verse). Having two young children, however, I was – and still am – immersed in the world of rhyming story books. Julia Donaldson and Dr Seuss are both huge favourites of ours, and masters of the genre. The 1970s classic The Giant Jam Sandwich (by John Vernon Lord, verses by Janet Burroway) was another source of inspiration. Strangely enough, after attempting to write several stories in prose, I found writing in verse quite liberating in some ways. Having said that, sometimes it can be a very frustrating experience when you know what you want to say but can’t find the rhyme to fit! I tend to write long lists of rhyming words and try out all kinds of combinations until I can make it work. 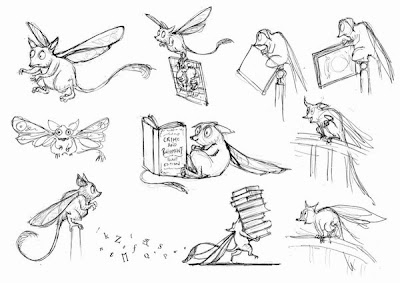 Q: The illustrations are adorable. And while most authors get little to no say in how the artist interprets her story, you happen to live with your book's artist. How was that process? Collaborative? Or do you work independently?

HD: It was fantastic! Fortunately for me, Tom liked the story a lot and got really excited about the illustrations. It was a very collaborative process right from the start; we spent a lot of time discussing how the characters should look (especially the Snatchabook), and how to create the right atmosphere for Burrow Down. Having said that, once Tom got going on the illustrations, I didn’t spend my whole time peering over his shoulder. He added several visual elements of his own invention (for example, the Snatchabook perched unhappily on a branch, all alone, on the second spread) that greatly enhance the story. It was so much fun for me to watch it all come to life, and to be part of that process. I feel very lucky indeed!

Q: The Snatchabook is having a simultaneous launch in the United Kingdom and the United States. Are you finding the buzz around it to be similar in both places? Or is one different from the other?

HD: I think children’s books get taken a lot more seriously in the U.S., as a whole. Although we have incredibly supportive publishers in both countries, the buzz in the United States has been much greater so far, with reviews appearing on many blogs, booksellers’ and librarians’ websites and in the press. A lot of this is thanks to the amazingly hard-working and pro-active team at Sourcebooks, but I think it is also because children’s picture books have a higher status in the U.S. than here in the U.K.

I’m not quite sure why that is, considering the wealth of home-grown talent (Julia Donaldson, to name but one)! Anyway, it’s lovely to know that The Snatchabook is already being enjoyed by so many people in the U.S., and hopefully in many other countries too (it is being published in 16 countries altogether so far). I should add that the buzz here in the Mumbles (our neighbourhood in Swansea) has been fantastic – we are lucky enough to have the support of a fabulous independent book shop, Cover to Cover, whose owner has organised two local launches for us and promoted the book very successfully in her shop. 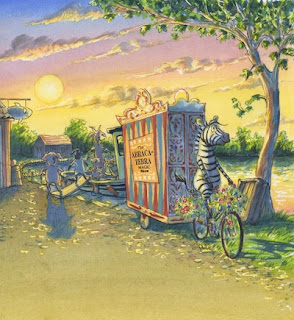 Q: What will we see next from you? Are you working on projects on your own or with your husband?

HD: We have a new book together coming out this time next year, hopefully, called Abracazebra. It’s another rhyming picture book, written by me and illustrated by Tom – he’s working on the final illustrations right now, in fact. It’s the story of a zebra who arrives in town with her traveling magic show, and a jealous goat who feels that she’s stolen his pitch. I also have another picture book text under contract with Faber, but I’m not sure who the illustrator will be yet (not Tom this time!). It’s called Do You Remember? and it’s a very simple story about a young girl’s earliest achievements.