Laurie Lawlor 's 'Rachel Carson' Shows the Power of One 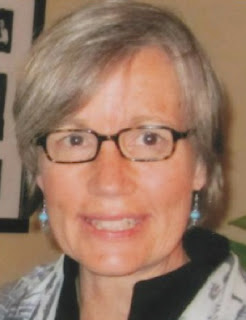 With Earth Day around the corner, it seems a perfect time to spotlight Laurie Lawlor's terrific non-fiction picture book Rachel Carson and Her Book That Changed the World (Holiday House, 2012). And even better timing is that Laurie and her book will be receiving the prestigious John
Burroughs Riverby Award, which recognizes outstanding nature books for young readers, today at the American Museum of Natural History in New York. Rachel Carson and Her Book, which is illustrated by Laura Beingessner, has also been named to the ALA Amelia Bloomer Project List for children's books that promote a feminist outlook.

Question: Your book is not only a look at Rachel Carson's life, but at the importance of her book Silent Spring. What made you decide to write about this? Where did the spark come from? 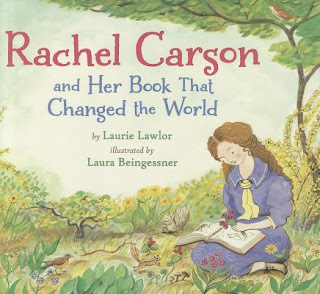 Laurie Lawlor: I have always been interested in books about the environment, specifically how to inspire children and young adult readers to go outside and explore and understand where they live. The great challenge is to create a book that is not all gloom and doom – the kind we see so often about species extinction and the rapid deterioration of the planet. While it’s important to understand these ongoing threats, it’s easy as a young reader to begin to sense only despair and defeat. How can one person make a difference? Asking this question helped me re-discover Rachel Carson and her seminal work, Silent Spring, which recently celebrated its 50th anniversary.

I began exploring her early work about the ocean. What amazed me most was the freshness of Silent Spring – how it speaks to us today. Carson took incredible risks to publish Silent Spring, which had such an enormous impact on the beginning of the environmental movement in this country and around the world. I found her courage and dedication to writing clearly and truthfully very heroic, especially in light of her own battle with cancer as she was struggling to finish.

Q: The challenge to writing a picture book is the economy of language – distilling your thoughts down to a few tight sentences. How hard was this to do with a book like this one, where the ideas are so immense? 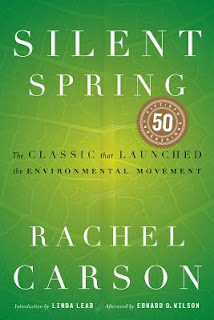 LL: This was probably one of the biggest challenges. I have written much longer biographies of such individuals as Daniel Boone, Captain James Cook, Edward Curtis, William Henry Jackson, and Helen Keller. Creating an accessible yet accurate and engaging biography about Rachel Carson with a limited format was very difficult. What to include? What to leave out? I was very pleased to have the back-matter area of the book to give more in-depth information about the impact of Silent Spring on environmental laws and the furor that she faced from the well-funded chemical industry.

LL: I am absolutely thrilled about this list because Rachel Carson was an individual, like Amelia Bloomer, who bucked the system. During the mid-20th century years, when she was struggling to become a biologist, few women were accepted in this field. She faced enormous prejudice not only
in her collegiate training but in her job search. Yet she did not give up on her dream of writing and research. I think that today this message is very powerful for young girls and young adult women who are still woefully underrepresented in the fields of science and technology. I have two bright granddaughters who I hope will feel free to explore these fields and pursue their passions, too!

Q: You're the author of more than 30 books and counting. What do you hope young readers take from your stories?

LL: The desire to explore, to find out more, to think about possibilities that maybe they’ve never considered before.

Q: With so many books to your name already, you might run out of ideas. Where do your inspirations for new books come from? How do you decide the next project you're going to tackle? And what will we see next from you?

LL: I love research, and so I hope to never run out of ideas. One “detective” trail usually leads to another and then another. If I could, I’d just keep sleuthing in libraries and museums and special collection departments and trips to cemeteries and ruins and never write the book. Research is
so much more fun. I am currently working on a young adult love story set in western England during the tumultuous years of the early 17th century – a time not so different from our own. This book has an environmental theme as well because it is about the political unrest and turmoil centered around the little known story of the draining and sale of the moors by wealthy land owners.  These early English wetlands had traditionally been held as common land by poor crofters and cottagers, and provided them with a way to keep their families alive with fish, fowl, reeds for their thatch roofs, and turf for their fires. The customs, magic, and folktales surrounding this fragile ecosystem are fascinating – and so are the tough people who lived there.
Posted by Kate Hannigan at 5:25 AM 2 comments: