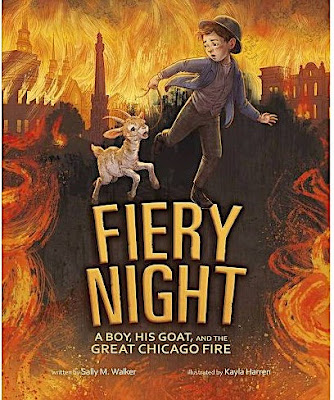 Sally Walker is the real deal. One of Illinois' finest children's authors, Sally has written more than 60 nonfiction books ranging from the history of climate change to the Mason-Dixon line, how Winnie the Pooh came to be to how Bessie Coleman took to the skies. And because of the high quality of Sally's research and writing, her titles earn recognition, making state recommended-reading lists, becoming Junior Library Guild selections, and earning prestigious honors like the Robert F. Sibert Medal as well as the National Council of Teachers of English (NCTE) Orbis Pictus Award for Outstanding Nonfiction.

As a big fan of Sally's work over the years—Champion: The Comeback Tale of the American Chestnut Tree (Henry Holt and Co., 2018) and Winnie: The True Story of the Bear Who Inspired Winnie-the-Pooh (also Henry Holt, 2015) are two of my all-time favorite examples of top-tier nonfiction for kids—I was delighted she had time to talk about her Chicago Fire book.

Enter here for a chance to win a copy of Sally Walker's Fiery Night!

QUESTION: Fiery Night features an illustration done by Justin Butterfield of his family's escape from the fire. Was that the launching point for your decision to write the book?

SALLY WALKER: It absolutely was the launching point. The Chicago Fire has interested me for a long time. Some years back, I was reading a book about the fire that included Judge Tree’s reminiscence of his experience during the fire. He was the Butterfield’s neighbor who gave them a ride. Tree mentioned offering the Butterfield family a ride, and that Justin had a goat with him. That made me curious. Immediately, I wanted to know more about the Butterfields and if I could find any further information about the boy and his pet. I was over-the-moon when I came across Justin’s drawing—conveniently labeled—of his family as the fled the fire. The text of Justin’s letter to his friend, which we couldn’t include in the back matter due to space concerns, can be found here. This website, The Great Chicago Fire and the Web of Memory, has tons of other great stories and photos of the fire.

Q: Can you talk about your creative process and how you approached the Chicago Fire story?

SW: My approach was to view the fire from Justin’s perspective. While Mother ran for family heirlooms, the most important thing to Justin was saving and protecting Willie. I empathized with Justin immediately: The first step in my family’s exit plan in case of a house fire is to grab our two cats!

As I wrote, I tried to incorporate instances from other accounts of the fire. For example, one person remembered their dog running away from the family. Another described standing in the cold lake water for hours, surrounded by horses and people. Keeping the age of my audience in mind, I did not trivialize Justin and Willie’s fears, but tried to express them in ways that the reader could relate to without be terrorized.

At times, I brought my own perspective to the story. For example, many of Chicago’s sidewalks were wooden. I don’t know that Justin had trouble getting Willie to step up onto the sidewalk. But I know, firsthand, that horses are often scared to step onto a platform or ramp. From that, I extrapolated that Willie might be too. By the way, Justin did not mention the goat’s name in his letter. I named him Willie, because at times he behaved almost as stubbornly as my sister’s cat, Willie.

Q: Your subjects range far and wide, from sunken submarines to beloved bears to chestnut trees. How do you decide what you're going to write about?

SW: I don’t always decide what I’m going to write about, sometimes a subject takes hold and insists that I write about it.  While I was researching for my book Sinking the Sultana (Candlewick, 2017), I “met” Louis Miskoguon and Amos Ashkebugnekay, two survivors of the explosion. They were Anishinaabe men who enlisted in a Civil War regiment of sharpshooters from Michigan. The enlisted men in the company they joined were all Native Americans. Their stories, and those of the men who served alongside them, filled my thoughts.  They just wouldn’t leave me alone until I wrote about them. Their experiences during the war became my book Deadly Aim (Henry Holt and Co., 2019).

Ideas seem to find me. In the newspapers. On the internet. Talking with and listening to people.

Whenever I run across information that makes me think “Whoa!  I didn’t know that,” I usually have a million questions about it. I want to learn more.

Q: How do you know when you're onto something good?

SW: Lots of the time, an idea doesn’t pan out.  It’s only when there is a good, solid story, one that continually intrigues me and one that I feel will reach out to young readers in some way, that I decide to write about it. I like stories that make me think; that tease my imagination in ways that make me happy, sad, or even angry. And in doing so, change me, and how I look at the world.

Q: Your nonfiction books are the gold standard. Can you talk about how you go about researching your books?

SW: Whenever possible, I visit the places that I am writing about to absorb not only the atmosphere, but to get a real sense of the geography of the place.  For example, walking the area in Michigan where Amos Ashkebugnekay lived and on the battlefields in Virginia where he fought. The documents in online archives give me a chance to become familiar with the subject through census reports, war records, or old scientific papers.  BUT visiting an archive in person is even better.  That’s when I find the gems that are not digitized:  personal letters, health records, and plenty of photographs. If I had a few pizzas and some jugs of water, I’d happily camp out for weeks in the National Archives, in Washington, D.C.

Libraries and historical societies are my favorite hangouts.  It’s helpful to read what other authors have written about the subject that I’m exploring.  It’s kind of like brainstorming with the author for additional ideas and avenues for me to explore. Libraries contain published diaries and the kinds of books that contain reminiscences like those of Judge Tree, Justin’s neighbor. Historical societies have lots of unpublished documents and manuscripts that I can’t find elsewhere. And there are lots of maps, too.  I adore old maps!

I also always talk with experts.  They offer wonderful insights and often lead to amazing adventures.  My interviews with experts led to working on an archaeological dig for my book Written in Bone (Carolrhoda Books, 2009) and to inoculating American Chestnut trees for Champion.

My filing cabinet has a folder filled with newspaper and magazine clipping of possible future books. And I have a similar file on my computer. I have no idea what Google docs is.

SW: Finally, I have a question for you: When you decided to write a novel, were there any books regarding planning/techniques that you found helpful? Young writers might find it useful. Old ones, too!

KATE HANNIGAN: Like you, I turn to experts! When I was trying to figure out the magic, I attended many writing workshops, conferences, critique groups, anything I could find that would help unlock the mysteries. Three were tremendously helpful.

First was hearing the lion of children's literature Richard Peck talk about finishing a novel and then immediately throwing out the first chapter and rewriting it, since that was when he finally had the full picture. Second was hearing Holly Black talk about plotting and outlining, planning story arcs and thinking hard about when to hit the big notes in the story you're telling. And the third was working with Franny Billingsley, another Chicago author and incredibly helpful human! She talked to me about the story's beating heart, and how the pulsing arrows we shoot at the start of the book had better hit their mark. This advice, along with reading as many books as I can in the middle-grade genre, has helped me muddle along!

Posted by Kate Hannigan at 5:00 AM No comments: