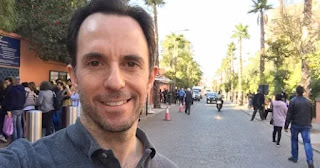 There's the dream of completing a manuscript. Then maybe landing a literary agent. And finally, imagining the day a book publishes and appears on a bookstore or library shelf. For Marc Tyler Nobleman, 2018 proved to be a doubly satisfying year with the publication of two fantastic nonfiction picture books from Clarion. His Thirty Minutes Over Oregon: A Japanese Pilot's World War II Story was illustrated by the wildly talented and prolific Melissa Iwai and — fulfilling another dream: winning awards — was named an ALSC Notable Children’s Book and an NCTE Orbis Pictus Award Honor. His Fairy Spell: How Two Girls Convinced the World That Fairies Are Real was illustrated by the also wildly talented and prolific Eliza Wheeler. 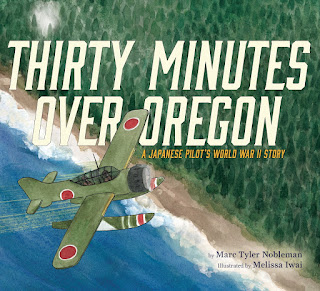 As a fan of picture book biographies and historical accounts, I was thrilled to come across the story of a 1917 photograph "documenting" a fairy sighting. I'd heard snippets of this account over the years and was completely intrigued. And as someone obsessed with WWII stories, I was eager to read about a Japanese attack on the U.S. mainland. When I realized Marc was the teller of both these tales, I had to reach out.

Question: Fairy tales, a WWII bombing run over Oregon. In 2018 you published two very different but equally fascinating nonfiction picture books. What was that experience like?

Marc Tyler Nobleman: I'm honored anytime a book I wrote gets published, though there is indeed something special about having two books out in one year. Though put out by the same imprint, I sold the manuscripts at different times and did not know at first that they'd come out within six months of each other. I like that they're both unconventional topics for a picture book and quite different from my previous two nonfiction picture books (both on creators of superheroes). It's fun to show range.

Q: What drew you to the story of the Cottingley fairies? Why did you want to write that book? 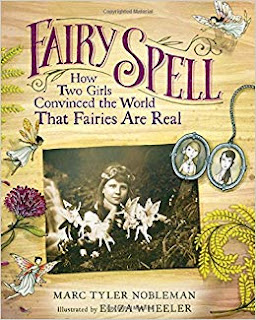 MTN: I'm drawn to true stories that haven't been done in picture book format, and I love a good twist — even better if there's a supernatural element involved. My previous few books had male leads, and I was happy to focus on females. I felt the story would be a great springboard for discussions with kids on the nature of belief, the necessity of verifying information as best you can before disseminating it, and even the gray areas of lying!

Q: The story of a Japanese bomber’s missions over U.S. soil is equally fascinating. Were you hooked from the moment you read about it?

MTN: Yes. I learned of Nobuo Fujita's bombing raid when he died in 1997; a friend showed me his obituary from The New York Times. I'm not a war buff or a Japanophile, which made it even better — I learned on the go. It just goes to show that we don't always know what we're interested in! And in any case, this is not your typical war story.

Q: Writing nonfiction for children, the bar for authors is set very high. Can you talk about how you research and write your books? What is your creative process like?

MTN: Research is hide and seek with the world, and just as addictive as playing hide and seek with your friends in the back yard. My nonfiction is heavily researched, calling upon as much primary source material as possible. I read as much as I can, take copious notes all in one long Word doc, and then pull out all of the info I would like to include to form an unstructured outline of sorts.

Of course given my preferred format, I can't fit every juicy nugget I include on that wish list, but that's part of the fun/challenge of writing: not what you put in, but what you leave out. I write my nonfiction as a narrative, trying to drop the reader in at an exciting moment, and I avoid forward-looking statements ("Little did he know that one day, what he was about to do would be infamous," etc.). I want the reader to be immersed in the story as if it's happening live, and teasing the future like that pulls some readers out of the world you're (re)creating, albeit subtly.

MTN: I consider my work nonfiction for all ages, but with special focus on young readers. I want to remind them as best I can that
a) history is exciting
b) history still matters today
c) nonfiction is non-boring.
It has that stigma among many kids, and my fellow writers and I are always looking for ways to overturn that misperception. Of course nonfiction CAN be boring; the way we tell it counts for a lot. I hope kids who read my books will realize that struggles are valuable, persistence is essential, and some heroes are very quiet about it.
Posted by Kate Hannigan at 6:00 AM No comments: